Demonstrators in Westminster demand end to Turkey assault on Syria 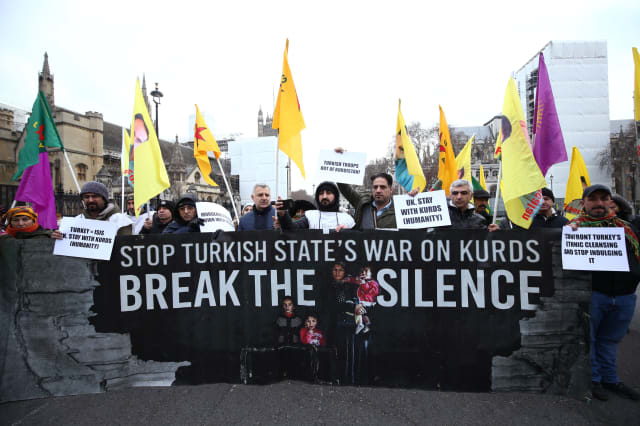 Protesters holding placards bearing images of Turkish president Recep Tayyip Erdogan demanded the Nato member cease its air and ground offensive, which began five days ago and has caused more than 130,000 civilians to flee their homes.

It comes after Prime Minister Boris Johnson and Foreign Secretary Dominic Raab urged Mr Erdogan to halt the incursion, saying it could undermine the fight against IS jihadists and worsen the humanitarian crisis in the war-ravaged region.

President Donald Trump has ordered all US troops to move further south to avoid the heavy fighting as he seeks to disentangle America from “endless wars”.

Niaz Maarof, 41, a driver from London originally from Kurdistan, told the PA news agency on Sunday that Kurdish fighters had “liberated the area they are running a democratic government and now Turkey, with the green light from America, is attacking the area”.

He added: “The world does owe the Kurdish now for what they did in Syria.

“If you really mean it, the British should stop selling Turkey weapons, because last year Theresa May gave them planes and now they are using them against us.

“The whole world is watching and no-one is saying anything.”

Fierce fighting on Sunday reached a displaced-persons camp in Ayn Issa, around 20 miles south of the Turkey-Syria border, where the Kurdish-led administration said in a statement that 950 IS supporters escaped after attacking guards and breaching the gates.

Wives and widows of IS fighters and their children were among those fleeing the violence near the camp, it added.

The human rights monitor said some 53 civilians have been killed since the start of the operation, including a child and a female politician shot dead by pro-Turkish gunmen.

According to the United Nations (UN) more than 130,000 people have fled their homes since Wednesday.

In a telephone call to the Turkish leader on Saturday, Mr Johnson voiced “grave concern” and called on him to enter into dialogue with a view to reaching agreement on a ceasefire, a No 10 spokesman said.

The spokesman said: “He recognised Turkey’s role at the forefront of the fight against Daesh (IS) and its generosity in supporting refugees who’ve fled the civil war in Syria.

“But the Prime Minister was clear that the UK cannot support Turkey’s military action.”

The assault against the Syrian Kurds, who played a key role in dismantling the IS caliphate but are regarded as terrorists by Turkey, has been widely condemned by Western powers.

Mr Erdogan has ruled out negotiating with “terrorists” and vowed to push on with carving out a 20-mile safe zone along the border.

Turkey said 440 Kurdish fighters and four of its soldiers have been killed since the operation began.

The Kurdish-led Syrian Democratic Forces said 56 of its fighters have died.