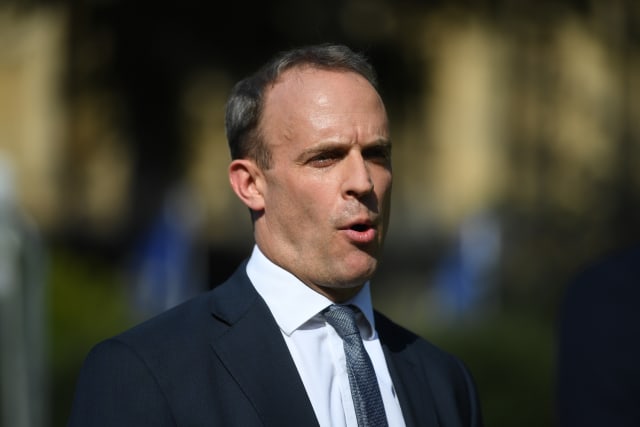 The Foreign Secretary has criticised Turkey’s military assault against Kurdish-held parts of Syria, saying it weakens the fight against so-called Islamic State and risks deepening the humanitarian crisis in the war-ravaged region.

Dominic Raab said Ankara must show “maximum restraint” as the air and ground offensive enters its fourth day, with tens of thousands fleeing their homes in north-east Syria, according to the United Nations (UN).

At least 11 civilians have died and dozens of fighters from both Kurdish-led and pro-Turkish factions killed, reports say.

Speaking at the 65th Nato Parliamentary Assembly at the QEII centre in Westminster on Saturday, Mr Raab said: “Our position is crystal clear. This incursion is wrong. We want to see maximum restraint, and avoid taking our eye off the ball with Daesh (IS).

Kurdish militias, who helped Western powers dismantle the IS caliphate, are under attack by Nato-member Turkey, which considers them terrorists and says the operation is necessary for national security.

There are concerns that hundreds of suspected IS prisoners, including foreign fighters being guarded by Kurdish forces, may escape during the chaos of the assault.

A representative from Turkey at the Nato parliamentary assembly event told Mr Raab: “I would like to clarify that Turkey’s operation is not an invasion, it’s a counter-terror operation.

“Shouldn’t we support our allies in these anti-terror operations?”

Mr Raab replied: “In relation to your reflections on the Turkish intervention in Syria, I just don’t agree.

“The risk is with the counter-terrorism operation you describe, taking on the SDF (Syrian Democratic Forces) and the broader objectives, is that it is weakening the overarching counter-terrorism goal of countering Daesh.

“I think the UK, like many others, is very concerned we’re taking our eye off the ball.

“It’s quite important that we have this conversation with our friends that we are mindful of their legitimate concerns.

“But nonetheless I think that only serves to sharpen the focus we need to have on the actions Turkey is now taking. We need to see maximum restraint.”

According to the Telegraph, Kurdish forces are “facing daily attacks from IS sleeper cells who appear emboldened by the chaos of the Turkish offensive”.

Five IS suspects escaped from a prison in the northern Syrian city of Qamishli as a result of Turkish shelling nearby, the report said, quoting Kurdish forces.

Meanwhile, Nato secretary general Jens Stoltenberg said he expected Turkey to “act with restraint” during a visit to Istanbul on Friday and urged it to “avoid any unilateral actions that may further destabilize the region and escalate tensions.”

Parliamentarians from the 29 Nato countries are meeting in London over the weekend discussing shared problems facing the alliance in its 70th year.

Founded in 1955, the Nato Parliamentary Assembly is separate from Nato but acts as a link between the alliance and the parliaments of its member nations.