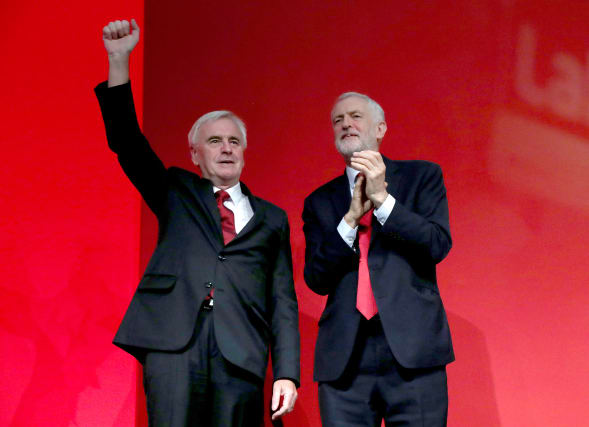 Jeremy Corbyn and John McDonnell would stand down if Labour loses the next election, the shadow chancellor has said.

Mr Corbyn’s election to leader in 2015 was a major coup for the left wing of the party.

But Mr McDonnell said he “can’t see” how he or close ally Mr Corbyn could continue to lead the party if they failed to win power after the next general election.

He made the comments in an interview with former Labour spin doctor Alastair Campbell for GQ magazine.

“I can’t see… I think it is the same for my own personal position, I can’t see so,” he told Mr Campbell, on the subject of either himself or Mr Corbyn carrying on in their roles after an election defeat.

“What we’d do is as the tradition, which is have an election for a new leader.”

Shadow cabinet minister Mr McDonnell said a woman should take over from the current leader and named shadow education secretary Angela Rayner as a possible successor to Mr Corbyn.

“I’m still of the view now that whoever comes after Jeremy has got to be a woman,” he said.

“We’ve got to have a woman leader. If you look at the new youngsters that have come through, they are fantastic.”

Despite discussing the process for replacing Mr Corbyn, the Labour number two said the Opposition party could “win a majority”.

Prime Minister Boris Johnson has repeatedly asked for MPs to back a general election, but the request has been refused until he rules out a no-deal Brexit.

Mr McDonnell said Labour could win a fresh poll outright but, should an election produce another hung parliament, his party would not strike any deals or form a coalition.

If working as a minority government fails, then he said Labour would request an immediate return to the polls, invoking memories of 1974 when Britain held two elections, with the second giving Labour a slim majority.

“I think we can win a majority, but if we go into a minority government situation, there will be no deals, we’ll just lay out our programme and they either support it or they don’t,” said the Hayes and Harlington MP.

“If they don’t support it we’ll go back to the country and it will be interesting, if they did, to see how they argue against a real living wage, investment in public services, restoration of trade union rights, tackling climate change. How can they argue against that?”

The 68-year-old said it “doesn’t matter” what comes first between either a general election and a second Brexit referendum – which Labour supports holding – and vouched that the party had overcome its problem with anti-Semitism.

He warned that Boris Johnson’s style of leadership was “unleashing forces” in the country that were “really worrying”.

Mr McDonnell said he found it “very difficult to see anything between” the Conservative Party leader and controversial US president Donald Trump.

“Johnson needs to understand and be worried about the forces he’s unleashing,” he told GQ.

“When you go into that political climate where actually you are lying through your teeth, and when you’ve got a crony media in large sections of it, you have the potential then of unleashing forces that you lose control of. I think we’re on the edge of that.”

He told Mr Campbell how Nazi swastikas and a sign saying “Leave means Leave” was sprayed onto a nursery in his London constituency after the Daily Mail newspaper “did a number” on him.

“We’ve not had that in this constituency in maybe 40 years. Those are the sorts of forces Johnson risks unleashing and I think he needs to realise the dangers there are in that,” he said.