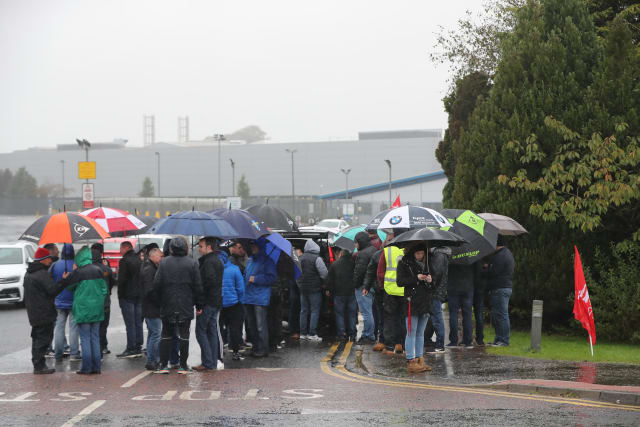 The future of troubled bus builder Wrightbus appears bleak after last ditch efforts to sell the company hit the rocks.

A prospective bid to buy the administration-hit operation, famous for building London buses, was derailed amid claim and counter claim over the cause of the breakdown.

A dispute over land assets controlled by a former owner of the company is at the heart of the dispute.

Wrightbus was placed into administration last month with the loss of 1,200 jobs.

The Ballymena company faces imminent liquidation if a buyer cannot be found.

While the company is in the hands of the administrators, the factory and associated lands are still controlled by former owner Jeff Wright.

On Thursday morning, Mr Wright said he was willing to sell those assets but claimed the deal floundered because Mr Bamford wanted to acquired unrelated farmlands owned by his family.

Mr Bamford responded, claiming he had made an offer at the asking price, which included the factory and associated lands, only for Mr Wright to reject the offer and increase the sum.

Frustrated former workers were kept updated on the developments by union officials as they gathered in the pouring rain outside the factory gates.

The trade union Unite claims the valuation gap between the parties is £1.5 million.

Mr Wright said it was “deeply regrettable” that a prospective sale had not been completed.

“The failure by Mr Bamford’s Ryse Hydrogen company to complete the deal to purchase Wrightbus is deeply regrettable especially after the exhaustive efforts all of us involved have gone to in providing every possible support,” he said.

Mr Wright said it was “disingenuous” to suggest his family were creating barriers over the land holdings.

“For the record the entire premises at Glagorm including the factory, fixtures and fittings as well as the land was agreed to be made available to all bidders, either to lease or purchase,” he said.

Mr Wright said the issue was over unrelated additional farmlands owned by his family.

He added: “I hope that Deloittes (administrators) have not been side-tracked by the Bamford engagement and can now put their energies into delivering a deal by working with the remaining bidders to secure the future of Wrightbus and the jobs in Ballymena.”

In response, Mr Bamford stated: “At 10am this morning I made an offer to the Wright family to match the asking price for the Wrightbus factory and land.

“This includes a sum to match the amount that the factory and associated land was purchased for two years ago from JTI (former tobacco factory).

“Mr Wright has since refused this offer and has now asked for a significantly higher sum of money.

“We want to save this business and put it on a sustainable footing, but regrettably if this offer is not agreed today, we understand that the business will go into liquidation tomorrow.”

Unite regional officer for Wrightbus, George Brash, said the workforce has been left bewildered by developments.

“This morning hundreds of Wrightbus workers and their families are standing in the rain outside the factory gates,” he said.

“They are standing in the hope they will hear that a deal has been done that will guarantee their jobs.

“These are workers who are already having difficult conversations with their children about what Christmas will bring.

“As these negotiations are being dragged out by horse-trading, the feeling of indignation among these workers, whose sole objective is to get back to work, is rising.”

North Antrim MP Ian Paisley had earlier urged all parties to put their shoulder to the wheel to get the deal done.

“There’s no second chances here – you can’t do this again on Friday or Saturday – this is the decision day.”

He told BBC Radio Ulster: “Either it’s the continuation of the building of the best buses produced in the world, or it’s the end of bus building in Ballymena.

However, Mr Wright later criticised the role played by Mr Paisley, claiming his interventions had been “unhelpful to say the least”.

“Mr Paisley would be well advised to leave the business of dealmaking to the professionals at Deloittes,” he said.