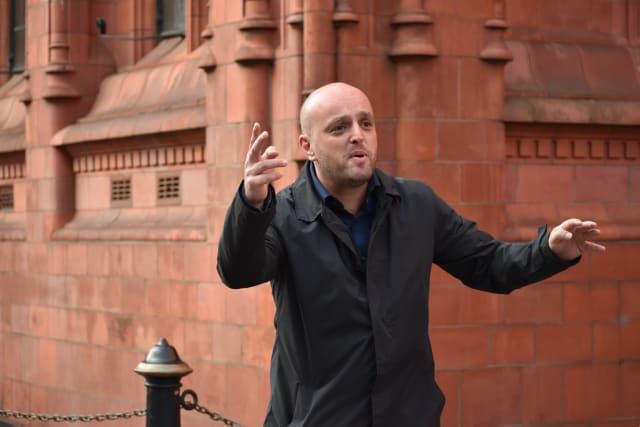 A warehouse worker arrested after kicking out at the front door of Labour MP Jess Phillips’s constituency office a day after a heated Parliamentary Brexit debate has been fined £40.

Michael Roby was said to be “hyper” when he was detained by police after shouting “Is this the fascist party offices?” and “Why are you blocking democracy?” on September 26.

The 36-year-old, of Vimy Road, Billesley, Birmingham, emerged from the city’s magistrates’ court on Thursday after admitting a public order offence, and claimed he had been taken to court for standing up for democracy.

Roby, who spoke inside the court building only to plead guilty and confirm his address and other personal details, was also ordered to pay £135 in court costs and a £32 victim surcharge.

Magistrates were told Roby was arrested after staff at Ms Phillips’s office alerted police at about 2.30pm that a man was outside “calling everyone fascists” and that they had turned off an intercom.

The front door of the office in Acocks Green, Birmingham, was also kicked with force, although no damage was caused, the court heard.

During a subsequent interview, Roby told police he was annoyed with Ms Phillips’s political views and became angry and banged the door with his fist because it was shut.

Roby’s lawyer told the court he had lost his job, was remorseful for his actions and suffered from depression and anxiety amid concerns he had mental ill health following a breakdown.

The court was told Roby went to speak to Ms Phillips, feeling he had no assistance and support around him.

After emerging from court, Roby referred to himself as working class, made reference to “the 51%” and shouted at reporters: “I have stood up for democracy. Look what happened to me. I got sent to court.”

Sentencing Roby for using threatening or abusive words or behaviour likely to cause harassment, alarm or distress, chairman of the bench Susan Powers told him: “This offence can only be dealt with by way of a fine.

“Had you not pleaded guilty today, your fine would have been £60.”

At the time of the incident, Birmingham Yardley MP Ms Phillips, who was not at the office, said staff had been confined inside the property as a man kicked the door, tried to smash windows and yelled that she was a “fascist”.

The MP said the incident had left her “jumpy and worried” following unrelated death threats.

The incident occurred a day after Boris Johnson came under scrutiny for his use of “inflammatory” language, with Labour leader Jeremy Corbyn saying the Prime Minister was encouraging people to act in “disgraceful and abusive” ways.