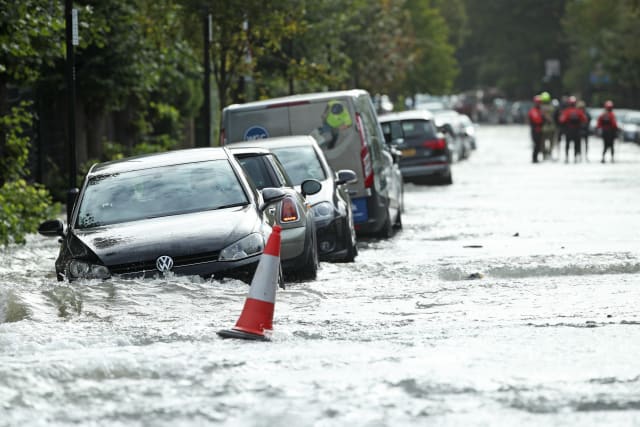 Up to 150 properties have been affected by flooding from a burst water main in north London, Thames Water said.

Residents had to be evacuated from their homes after the pipe ruptured on Queens Drive in Finsbury Park on Tuesday morning.

Around 80 firefighters and 12 fire engines were called to assist with the incident, which saw nearby roads submerged under water.

People living in eight properties have been rehoused by the company’s loss adjusters, Thames Water said.

London Fire Brigade said its crews were called to the incident, at the junction of Queens Drive and Princess Crescent, at 7.47am.

The fire service said an area measuring 600 by 200 metres had been flooded to a depth of around one metre.

Thames Water confirmed its specialist engineers had stopped the flow as of 1.30pm.

A Thames Water spokesman said around 100 company representatives were in the area to take care of residents’ needs and handle all compensation claims.

The company said the burst occurred on one of its 36-inch wide pipes, resulting in other areas of north London losing their water supply, or experiencing low pressure, for “less than” four hours.

London Fire Brigade station manager Jonathan Parker said: “Crews have been visiting affected properties and leading residents to safety where necessary, as well working hard to pump water away from the area and prevent flooding from spreading to other properties.”

Hackney London Borough Council advised residents whose homes had been affected to go to the West Reservoir Water Sports Centre where staff would be available to support them.

The council said Parkwood Primary School on Queens Drive had been closed due to a lack of running water.

Abi Glover, 27, who lives in a first-floor flat at St John’s Court in Queens Drive, told the PA news agency that the ground-floor properties in her building were “completely flooded”.

She said: “The water started at 7.40am and it has not stopped.

“Everyone has been wading out with no shoes on.”

A Thames Water spokesman said: “We’re really sorry to any customers affected by our burst main this morning.

“Our top priority now, having stopped the water escaping and restored supplies back to normal, is to support those impacted by the flooding.”

The spokesman said the company is spending more than £1 million each day on its network to reduce leaks.

The company said many of its 100,000 miles of pipes throughout London are “well over 100 years old”.

“We’re also exploring all modern technology and techniques to gain tighter control of our ageing network to reduce the risk of disruption like this into the future,” the company spokesman said.

Thames Water said a full investigation into the burst will take place as a “matter of course”.