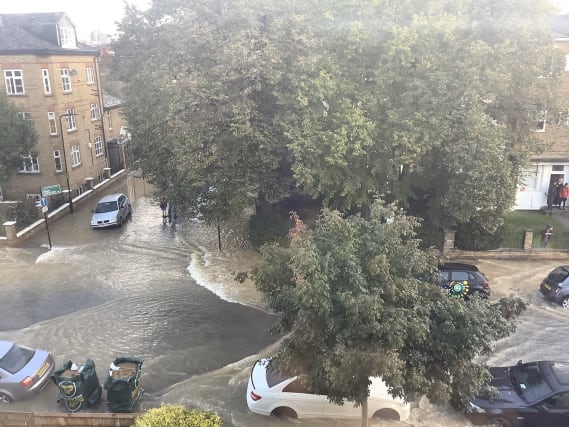 Residents had to be evacuated from their homes after a burst pipe flooded a north London street.

Eight fire engines and around 60 firefighters were called to assist with the incident in Queens Drive, Finsbury Park.

A London Fire Brigade spokesman said the flooding had affected a 500 square metre area and that people were being evacuated from their properties.

Thames Water said it was aware of the issue and that specialist engineers had been sent to the scene.

Steve Stubbs, who lives in Queens Drive, told the PA news agency: “My water didn’t work when I went to grab a drink of water so I asked my housemates whether they had any issues – one of housemates left moments before it happened, it seemed.

“Then I checked Twitter and saw one tweet about a flood on Queens Drive. I thought ‘Oh, that’s where we are’. I opened the balcony door and saw this river flowing down the road.

“The school looks OK as it’s on slightly higher ground, but residents around the area on ground floors are having issues, I think.

“We are dry up on the fourth floor.”

Karim Traboulsi, also from Queens Drive, told PA that he was woken up by the noise of the water.

He said: “My first thought was ‘I probably won’t be able to make it to work’.

“Now we’re a bit worried about our elderly neighbour in the basement flat.

“(Water) isn’t yet coming through, but it’s leaking into the front garden, but hasn’t made it to the stairs or the building foundations. The water level is not rising, as far as I can tell, but it’s still flowing very quick.”

Mr Traboulsi said firefighters were on the street talking to residents outside.

He added: “I’ve seen some people trying to brace the water but it seems the fire department personnel are advising them against it but not stopping them per se.”

Footage taken of Queens Drive showed fast-moving water flowing down the street, with cars still parked on the road.

A Thames Water spokesman said: “We’re sorry to any customers affected by our burst main this morning. We’ve sent our specialist engineers to the scene as a top priority, and they will be working hard to get everything back to normal as soon as possible.”

In a Twitter post, London Fire Brigade said eight fire engines and “around” 60 firefighters had been called to Queens Drive.