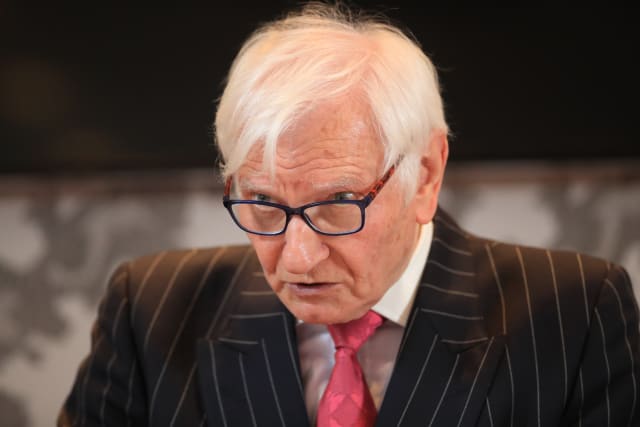 The Independent Office for Police Conduct (IOPC) found no evidence of criminality or wrongdoing despite a damning review of Operation Midland conducted by former High Court judge Sir Richard Henriques.

He identified 43 police failings when he was called in after the 16-month probe into the false claims made by fantasist Carl Beech, then known as “Nick”, ended in 2016 without a single arrest.

Sir Richard found the warrants to raid the homes of D-Day veteran Lord Bramall; Lady Diana Brittan, the widow of former home secretary Leon Brittan; and former MP Mr Proctor were “obtained unlawfully” and that the district judge who granted them was “misled”.

But the IOPC investigation found no evidence that any of the officers involved deliberately withheld information and said they would have no case to answer for misconduct.

Ahead of the publication of the IOPC’s report on Monday, Mr Proctor said in a statement: “The so-called investigation is simply a whitewash.”

Mr Proctor said the report was a “pathetic attempt to excuse the police for their mistakes, incompetence and negligence by saying they acted in good faith” to maintain public confidence in the wake of the Jimmy Savile scandal.

“This report shows the IOPC is worse than useless. It actually defends the police against the authoritative findings of Henriques because they wanted to boost public confidence in themselves,” he said.

“The Home Secretary should remove the IOPC director general and the IOPC must be abolished and replaced by experts who are genuinely qualified to assess and to criticise police failings. We now know the police watchdog is blind,” he added.

His lawyer, Geoffrey Robertson QC, said: “It is a fundamental mistake for the IOPC to think that police are justified in abusing their powers in order to maintain public confidence in themselves – that is an improper motive and it is outrageous that the IOPC should think it is a valid excuse for accusing innocent men of heinous crimes or misleading a judge to obtain a search warrant for their homes.”

Writing in the Daily Mail, Sir Richard expressed concern over the watchdog’s “lack of knowledge of criminal procedure” and called on Home Secretary Priti Patel to take action.

He said the IOPC investigation was “flawed”, that “no effective interrogations” took place and that he found it “difficult to conceive that no misconduct or criminality was involved by at least one officer”.

“Whilst all five, absent any proper investigation, must be presumed innocent, the responsibility of the IOPC was to carry out a high-quality investigation in a timely manner,” he wrote.

“The delay in reaching their findings of almost three years is gross and inexcusable, and goes some way to inhibiting any further investigation.

“The investigative process itself was minimal, unprofessional and the decision-making was flawed.”

Sir Richard said the two most senior officers among the five investigated – Deputy Assistant Commissioner Steve Rodhouse and Detective Superintendent Kenny McDonald – had not been asked “a single question in interview … written answers having been accepted without questioning”.

He concluded: “Maintenance of law and order depends upon the effective oversight of those invested with power. Who guards the guards themselves? A malfunctioning police force has not received the necessary oversight.”

He said: “The IOPC gives the impression of working hand in glove with the police. Confidence in our police needs to be restored.

“I am calling for a judge-led independent inquiry into Operation Midland and how patently false allegations are handled by the police.”

The IOPC said: “This was a thorough and detailed investigation, reviewing over 1,800 documents, 300 statements gathering 14 independent witness accounts and gaining accounts to three officers who were under investigation. This was not a cursory exercise.

“As Sir Richard writes ‘no subject should be tried without proper investigation’. And, as he acknowledges in his own review, the IOPC is the right and correct authority to do this. Our investigation was both independent and impartial.

“To suggest there is no accountability is also wrong. Our report – due to be published (on Monday) – contains 16 learning recommendations that advocate systemic change so this never happens again.”