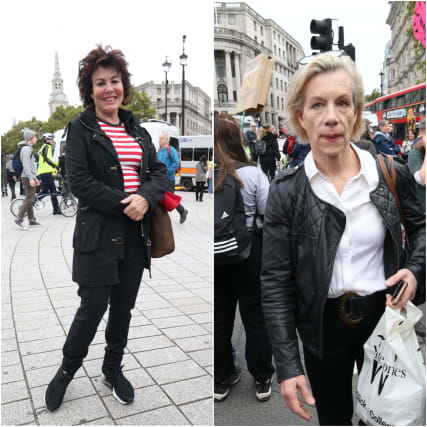 A host of celebrities, including actors Sir Mark Rylance, Juliet Stevenson and Ruby Wax, and fashion models Daisy Lowe and Arizona Muse, came to central London to support climate change activists on the first day of the two-week protest.

Mark Rylance addressed a crowd assembled off the Mall in the drizzling rain and said: “The collapse of society is certain.

“I have many friends in the entertainment industry who are struggling to come up with stories that match what is actually going on today.

“People have been saying to me, it doesn’t make a difference having a celebrity joining the protests.

“I am confident these protests are going to lead to a solid change.

“I have seen protests against Apartheid, poll tax, and all sorts of things create a change.

The multi-award winning actor, who repairs his clothes and drives an electric car, encouraged cheering protesters to camp overnight so police could not remove their gazebos and signs.

Following his speech, one protester presented the actor with an acorn and another thanked him for resigning from the RSC in June in protest against the company’s links to BP oil.

This week the RSC ended their eight-year contract with the oil provider.

Ms Stevenson and others gathered in Trafalgar Square opposite Nelson’s column, where a funeral car containing a coffin which read “our future” was parked.

“We can’t any longer allow governments to do this so we have to make it clear that there is no more time.

“This is the most important issue of our time, we’ve been swamped by Brexit for the last three years and No one has been thinking of much else, especially politicians.

“This is the main issue at the moment.

“There’s a long tradition in this country of people saying governments are not acting we have to make them realise how urgent this is.

“This is an issue that is a global issue and we don’t feel it so much here in England but all over the world millions and millions of people are having their livelihoods wrecked.

“We’ve known this for years.

“They’re (the Government) talking about 2050 and scientists have said we have 12 years before we’re in a place where the climate is irreversibly damaging our planet and we won’t be able to repair or fix it.

“We need to make them realise that time is not on our side at the moment.”

Fashion model Muse, who attended the demonstrations with her 10-year-old son also praised the organisation of the Extinction Rebellion movement.

“As a climate activist this is everything you wish for, to be in a huge group of fellow humans admitting that we are in a crisis and that we need to act quickly and feeling the power of moving together and that we can actually do this.

“I’m here with my son, he’s taken the day off of school which we take very seriously, and we’re going to check out the family zone because what I love about XR is the peacefulness, the non-violence.

“The strategy that they have is pretty incredible, to get everyone mobilised in a safe and healthy way, to overwhelm the police system but in a peaceful way.

“XR is about freedom and honesty and truth and doing what you need to do to exercise your need to save the planet.”