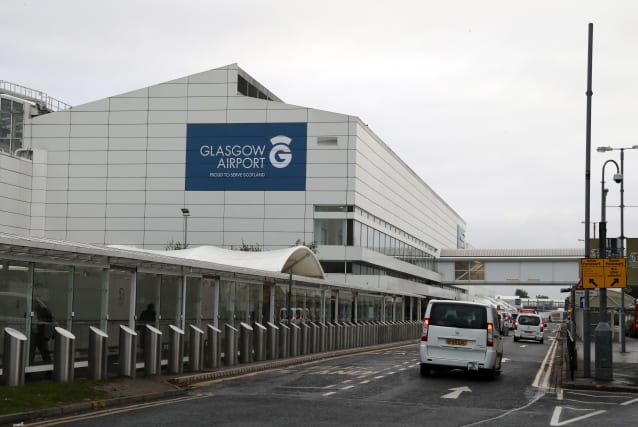 An airport was partially evacuated and an aircraft cordoned off after a leak in cargo containing vaccinations.

Passengers were taken off the KLM flight which arrived at Glasgow Airport from Amsterdam at around 10am on Friday as a precautionary measure.

The aircraft was cordoned off and passengers were evacuated from the “international pier” of the airport as investigations continued.

Emergency services were also called to the scene while the source of the leak was determined.

They later concluded the leak was from cooling packs of dry ice around the vaccines.

A statement from KLM said: “KLM confirms that on board KL1473, operating between Amsterdam and Glasgow, a package packed in dry ice started to leak.

“The package contained glass tubes with vaccines. These tubes have remained intact with only the cooling around them starting to leak.

“As a precaution, the fire brigade cordoned off the immediate vicinity of the aircraft. Passengers were never in danger but were taken off board as a precaution.

“The incident was stood down at 1330 after the package was declared safe by emergency services.”

A spokesman for the airport added: “At approximately 10am, the airport fire service attended an arriving KLM flight in response to concerns raised over a piece of cargo.

“The incident was stood down at 1325 after the package was declared safe by emergency services.”

The incident was ongoing for more than three hours, and a slip road to the airport from the nearby M8 motorway was also shut as a precaution.

Traffic Scotland tweeted to say the eastbound exit slip to the airport was “closed due to an ongoing incident”, but then updated its tweet to say it had reopened shortly before 2pm.

A Police Scotland spokeswoman also said: “Following examination of the cargo package on the plane at Glasgow Airport, we can now confirm that the package has been deemed safe and there are no suspicious circumstances surrounding this incident.”