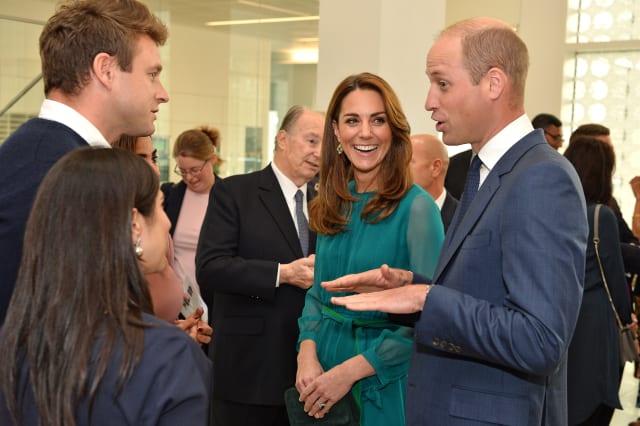 The Duke of Cambridge has revealed he is wary of spicy food ahead of he and the Duchess of Cambridge’s official visit to Pakistan later this month.

Both the duke and duchess made a visit to the Aga Khan centre in central London, where they met with prominent British-Pakistani business leaders, musicians, chefs and artists.

Among those the pair met was DJ Naughty Boy and Sarfraz Manzoor, whose memoir recent film Blinded By The Light was based upon. Both gave the couple personal gifts.

The event – hosted by Muslim spiritual leader the Aga Khan – saw the couple meet with the 2017 winner of Masterchef, Saliha Mahmood Ahmed.

During a discussion about Pakistani food, William said he “love(d) spice but not heat”, adding: “Me and heat, not so good.”

Referring to the upcoming official visit, the duke appeared to be looking forward to eating the local cuisine – saying he will need to bring “a bigger suit” with a “bit of expansion” for the trip.

Kate also expressed difficulty in cooking curry as a family, explaining the couple’s three children – Charlotte, Prince George and Prince Louis – usually have theirs with no spice.

“It’s so hard cooking curry in the family, the children have a portion with no spice, yours (the duke’s) is medium, and I quite like it hot,” she said.

Another group discussion saw Mr Manzoor, who adapted his own 2007 memoir Greetings from Bury Park into Blinded By The Light, gave a copy of his book to the duke to “read on the plane”.

The couple laughed as Mr Manzoor removed the book from his back pocket, with the duke joking: “What else have you got in your pockets?”

“I said this is probably smashing all sorts of protocol,” Mr Manzoor told reporters afterwards.

“They were quite surprised I managed to get it out of my pocket but I thought it would give them an insight into Pakistani culture.”

He added that the couple had expressed they wanted to watch the film, directed and co-written with Gurinder Chadha, before their trip.

On the duke’s wariness of spicy food, Mr Manzoor added: “They were saying he likes medium spice – I don’t think it exists in Pakistan.”

The duchess, wearing a teal ARossGirl dress with an emerald green sash, accessorised with earrings by Pakistani designer Zeen, was given an evil eye brooch by music producer Naughty Boy.

The hitmaker, who launched his music career with a grant from the Prince’s Trust, said the gift protects “from any envy” and is “very spiritual”.

“I didn’t want to come empty handed,” he said afterwards.

“That’s the Pakistani in me.

“I had three and I was looking for something to give to Kate. She was clearly happy with it, I think she’s seen it before.”

He also thanked the couple for choosing two of his songs for the Heads Together charity campaign in 2016.

Heaven with Emeli Sande was chosen by Kate, while the Duke of Sussex chose Runnin’ featuring Beyonce.

On his collaboration with Sande, Naughty Boy said he told the couple he was appearing in Antiques Roadshow on Monday with the singer – which the royal couple said they would watch.

Adil Ray – dubbed the “Pakistani Piers Morgan” by comedian Shazia Mirza at the event on Wednesday – said he told the duke his moniker, to which William replied: “I’m not sure it’s a good thing.”

They also met Bas Javid, a commander in the Metropolitan Police and brother to Chancellor of the Exchequer Sajid Javid, and boxer Haroon Khan, brother of Amir Khan.

The duke and duchess are due to embark on a royal tour of Pakistan from October 14 to 18.