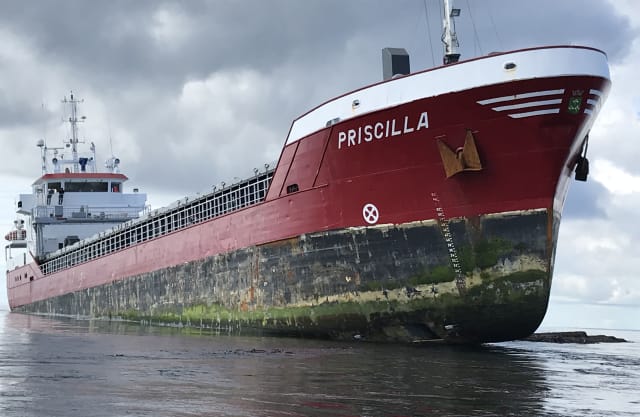 A cargo vessel which ran aground on rocks drifted off course while the watchman viewed music videos on his mobile phone, an investigation has found.

The MV Priscilla grounded in the Pentland Skerries off Orkney at 4.39am on July 18 last year.

A Marine Accident Investigation Branch (MAIB) report found that when the officer of the watch took over at 2am that day, he turned off track steering and switched on the vessel’s autopilot.

He then sat in a chair watching music videos that were being streamed to his mobile phone, and may even have fallen asleep for a time, the report said.

When the officer of the watch realised at around 4am that the vessel was off course, he decided to steer the ship between two small islands he could see ahead, but relied solely on radar data and did not refer to navigational information which would have showed there was a shallow reef between them.

The report said: “When approaching Pentland Firth, Priscilla was set to the south of its planned track but this was not observed because the officer of the watch did not monitor the vessel’s progress for about two hours; instead, he sat in the bridge chair and watched videos.

“When the officer of the watch realised that Priscilla was off track, there was ample time to regain the planned route.

“Instead, the officer of the watch chose an alternative route that placed the vessel in imminent danger; this happened because he relied solely on radar data and did not refer to navigational information when making this critical decision.

“There were no navigational alarms to warn of danger and, although the accident happened at night, no additional lookout had been posted.

“The bridge navigational watch alarm system was also switched off.”

MV Priscilla’s officer of the watch responded to two verbal warnings from shore authorities highlighting the danger ahead.

The second warning told him that there were rocks ahead and clear water to the south, however the action he took in response to the warnings suggested he did not fully understand the situation and how to turn the vessel away from danger, the report said.

The Netherlands-registered vessel was travelling from Klaipeda in Lithuania to Silloth in Cumbria carrying 3,300 tonnes of fertiliser when the incident happened.

None of the six crew on board were injured.

The report said it was not clear why the officer of the watch had not tried to return to the planned route when he realised the vessel had drifted off course.

However it said he might have been anxious about his “perceived mistake” of allowing the vessel to drift off track and might not have wanted to alert the master of the vessel, who he did not call.

The vessel was re-floated a few days after the grounding after some of the cargo was removed, and then continued its journey to Silloth.

MV Priscilla then went to dry dock in Swansea, South Wales, where a full inspection revealed extensive structural damage throughout the forward section of the hull.

The MAIB said that since the grounding, the Maritime and Coastguard Agency (MCA) has taken steps to improve the standards of vessel traffic monitoring in the Pentland Firth.

Priscilla’s owner has conducted an investigation into the cause of the accident and has updated onboard procedures.

Its amended safety management system includes the posting of dedicated lookouts, and it bans officers of the watch from using mobile phones.

A MCA spokeswoman said: “Following the grounding of the Priscilla in the Pentland Firth, the Maritime & Coastguard Agency carried out an internal review as it does with all incidents.

“There were 33 Coastguard officers working across the National Network at the time of the incident in July 2018 which is above the recommended requirement of 31.

“As a result of the internal review a number of lessons have been learnt including process enhancement, team and individual development requirements have also been identified and addressed as appropriate.”