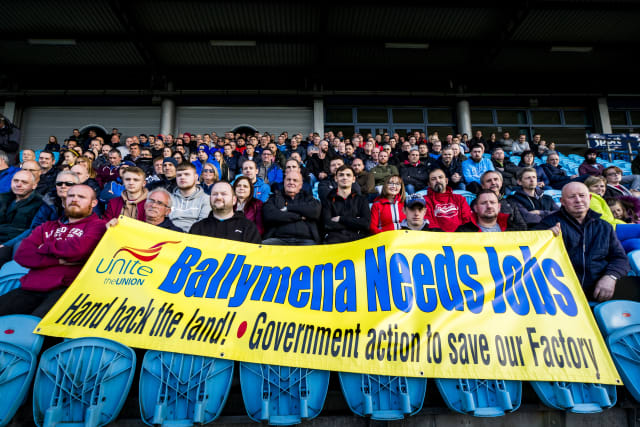 The Ballymena-based company was placed into administration last week with the loss of 1,200 jobs.

Hundreds of Wrightbus workers and their families gathered at Ballymena Showgrounds on Wednesday afternoon for a mass meeting organised by the Unite union.

Harland and Wolff worker Joe Passmore was among supporters that turned out to show solidarity, and urged the Wrightbus workers to “keep fighting for their jobs”.

It came days after the Harland and Wolff workers learned a buyer had been found for the Belfast shipyard and the jobs were to be preserved.

Those gathered at the Ballymena Showgrounds site were told by a union official of interest in Wrightbus from four bidders.

George Brash, Unite regional officer, said: “Two of the bidders we were already aware of from previous meetings, and there was two additions from the EU.

“So those bidders have been on site this week and we are looking to have meetings with them and hopefully try and get something sorted so that you can get back to work.”