Artist opens New York delicatessen with 30,000 products made of felt 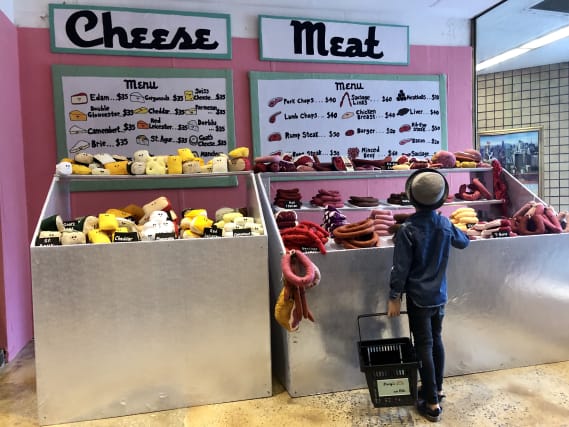 A British artist has opened an upmarket delicatessen in New York’s Sixth Avenue – stocked with 30,000 products made from felt.

Each piece in Lucy Sparrow’s Delicatessen On 6th is exactly the same size and weight as it would be in real life, from steaks to bottles of beer and tiny chocolate truffles.

The food emporium features fish, shellfish, sushi, cheese and meat counters as well as a bakery, a patisserie and a stand stocked with more than a dozen varieties of tiny chocolates.

Reese’s Puffs cereal, Welch’s Concord Grape Jelly and Oscar Mayer salami are some of the branded products available, along with bottles of Brooklyn lager, Budweiser and Saint Agur cheese.

Shoppers are able to walk through the doors of the store, pick up a basket and select items as they would in any other New York deli as every product is for sale.

Every item is adorned with tiny eyes and a smile – except for crying onions – to encourage visitors to consider consumerism and their relationship with the food they buy.

Sparrow, 33, has spent a year creating the thousands of hand-sewn and hand-painted products for the shop, signing each one that goes on the shelves.

“When you come through the door of this felt deli, you can see an absolute plethora of colour and little faces looking at you,” the artist, from Bath, Somerset, told the PA news agency.

“The fish counter has everything from lobster tails to octopus tentacles and salmon fillets.

“We have macarons, a chocolate counter, an entire meat counter with loads of sausages and steaks, so there really is something for everyone.

“Everything has its own personality. This is the most alive deli in New York.”

Putting faces on everyday items that people buy helps them to consider their relationships with them, she said.

Sparrow said she had received the “best feedback” from visitors to the store – with items such as a 200 US dollar (£163) lobster selling out before the shop had fully opened.

“It gives them a little taste of what I’ve been feeling from the past year – absolute happiness,” she said.

Each macaroon – with flavours from red velvet to salted caramel – costs 20 dollars (£16), while chocolates such as mint truffles and marzipan are priced at 10 dollars (£8).

Tuna steak, salmon fillet, shiny anchovies and sardines, shrimps, lobster tails, crabs and oysters that come out of their shells are on the fish and shellfish counter.

Purchases are made on a felt till, which has tiny patches showing that Mastercard and Visa payments are accepted.

The installation, at the Rockefeller Centre, is part of the Art In Focus public art programme and presented in partnership with the Art Production Fund.

In 2014, Sparrow opened a fully-stocked felt Cornershop in London’s East End, as well as a supermarket named Sparrow Mart in Los Angeles in 2018.

Earlier this year, she filled a gallery with 70 pieces recreating the world’s most recognisable artworks.

The exhibition, in Beijing, included her take on pieces by Botticelli, Van Gogh, Rembrandt, Monet and Hopper.

Lucy Sparrow’s Delicatessen On 6th is open on the corner of 49th Street and 6th Avenue in New York until October 20.