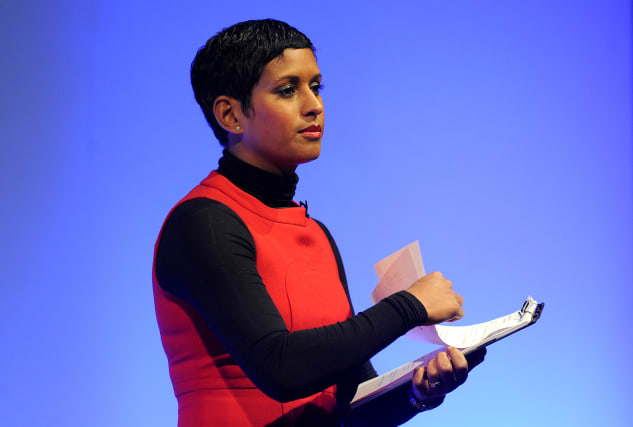 The BBC is facing a growing backlash over a decision to rebuke Naga Munchetty, with Sir Lenny Henry, Gina Yashere and Adrian Lester among the latest to criticise the corporation.

Dozens of prominent black Britons have written to the BBC saying their position is "deeply flawed" and "illegal".

A letter to the broadcaster in the Guardian and signed by Sir Lenny, Yashere, Lester and dozens of others, said: "To require journalists of all ethnicities and races to endorse racism as a legitimate 'opinion' is an abrogation of responsibility of the most serious nature."

The BBC upheld a complaint against Munchetty, who said in a July 17 BBC Breakfast broadcast that President Donald Trump's call for a group of female Democrats to "go back" to their own countries was "embedded in racism".

Figures from the world of broadcasting and politics have spoken out on the decision – and broadcasting watchdog Ofcom will also assess what was said against its own broadcasting rules.

Chancellor Sajid Javid tweeted the situation was "ridiculous", adding: "It's perfectly understandable why she said what she did", while Labour's Clive Lewis has tabled an early day motion in Parliament condemning the "perverse" decision.

A number of BBC figures have aired their views on the saga, with BBC Five Live presenter Nihal Arthanayake tweeting: "So my understanding of the BBC ruling is that if a public figure called me a 'Paki' I could tell you that what they had said was racist but I couldn't say that aforementioned public figure was a racist. I'm glad we cleared that up."

"Risk of double standards on big Qs of race + gender. BBC, sort yourself out."

The Executive Committee of the broadcaster sent a message to employees making clear its stance on Ms Munchetty's case and racism – saying that she was justified in saying that telling someone to go back home was racist.

It said: "You will have heard a lot of comment over the past few days about the BBC and the reporting of racism.

"The BBC is not impartial on racism.

"Racism is not an opinion and it is not a matter for debate. Racism is racism.

"Naga Munchetty – one of our stars – was completely within her rights to speak about the tweets of Donald Trump which have been widely condemned as racist."

The message has been sent to all BBC staff on behalf of the Executive Committee, which includes Lord Hall.

It followed a decision by the BBC to uphold a complaint, in part, for an on-air conversation following the controversial comments by Mr Trump directed at politicians Ilhan Omar, Alexandria Ocasio-Cortez, Rashida Tlaib and Ayanna Pressley.

It was ruled that Ms Munchetty crossed the line when she commented on statements made by Mr Trump.

She told her co-presenter Dan Walker: "Every time I have been told, as a woman of colour, to go back to where I came from, that was embedded in racism," adding: "I'm not accusing anyone of anything here, but you know what certain phrases mean."

Questioned further by Mr Walker, she said she was "absolutely furious a man in that position thinks it's OK to skirt the lines by using language like that".

The BBC initially commented saying: "Overall her comments went beyond what the guidelines allow for."