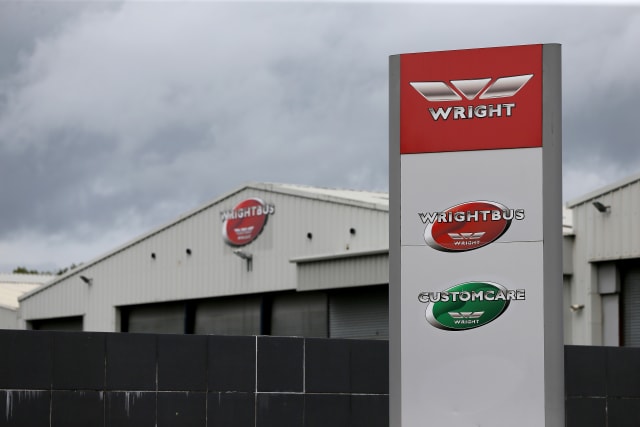 A bidder who agreed to rent the Wrightbus factory later withdrew the offer, the Wright family have said.

The owners of the ailing firm have denied blocking a deal to save the operation, which this week entered administration with the loss of 1,200 jobs.

A spokesman said there were two final bidders in discussions last week regarding acquisition of the Wright Group.

But he added: “A rental agreement for the sites was reached with one bidder, who then pulled out of the deal on Friday 20th September.

“A second bidder discussed purchasing the sites, but no formal offer was made by that bidder.

“Any reports to the contrary are completely inaccurate.”

Meanwhile, a church led by family member Jeff Wright has said it understands the hurt and anger over the redundancies.

The Green Pastures charity received £15 million in donations from Wrightbus over six years.

A spokesman for the church said: “As any church would be, we are devastated by the huge number of job losses at the Wright group and we are especially heartbroken because of the impact this will have on so many individuals and families in our local towns and communities.

“We understand the hurt, anger and confusion felt by so many, as many within our own congregation have been personally affected by these job losses, and we are doing all we can to support them at this time.

“As with any donation we receive as a church, we are incredibly grateful for the support the Wright family have offered us.

“They, along with many others, chose to be generous when their family business enabled them to do so.

“The leadership, staff and people of Green Pastures Church will continue to love and serve people in our community through these challenging times.”