NI Secretary ‘under pressure to intervene to save Wrightbus jobs’ 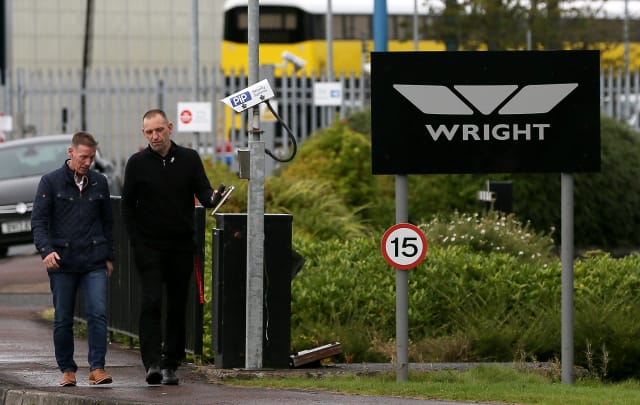 The Northern Ireland Secretary is under pressure to intervene to save jobs after one of the UK’s main bus builders entered administration, a union official said.

Trade unionists are holding daily meetings with the company running Co Antrim-based Wrightbus after 1,200 workers were made redundant.

It followed failed attempts to find a buyer.

Unite the union regional officer George Brash said: “They said they are doing everything they can and they are going to have daily meetings with us and contact with us throughout this process.

“We are hopeful. It is very time-critical but at this stage we are putting pressure on the Secretary of State (Julian Smith) to intervene, we will continue to talk to the administrators and our goal is to get this operation up and running.”

Wrightbus built London’s Routemaster double-decker – dubbed the “Boris Bus” – which was ordered by the Prime Minister when he was mayor and chair of Transport for London, the capital’s public transport operator.

Mr Brash met Wrightbus administrators Deloitte on Thursday at the Ballymena plant and said he would be communicating with his members.

Meanwhile, Ballymena United Football Club has offered free admission to a weekend fixture to former workers at the factory.

The club said: “The devastating news yesterday that Wrightbus has entered administration was a body blow to their workers, their families and the wider supply chain, many of whom are in the make up of our loyal fan base.

“At Ballymena United we recognise that our club is a focal point for all sections of the community and we share in the emotions that have swept over our town in the last 48 hours.

“We hope that, even if for 90 minutes, everyone’s mind will be diverted to the team on the pitch and we can roar the lads home to a valuable three points.”

The club offered the workers free entry to their weekend fixture against Cliftonville.

Wrightbus won contracts around the world with its innovative green technology but struggled with cash flow problems and a wider downturn in the industry.

He said: “The company should have engaged with the union much earlier to explore alternatives.

“Those alternatives are diminishing into fewer jobs of less quality and lower pay for such loyal staff.

“That loyalty deserves to be rewarded, especially as the Prime Minister has form with Wrightbus, and boosted his profile at photo-opportunities at the now shuttered Ballymena plant.

“It is essential that the state steps up if an alternative buyer cannot be found to save these jobs, or to utilise those skills in energy-efficient public transportation.

“Like the workers at Harland & Wolff, the workers at Wrightbus should be viewed as investments in any Green New Deal, and not a cost to the Exchequer.

“The trade union movement stands ready to support our friends in Unite in any way we can.”