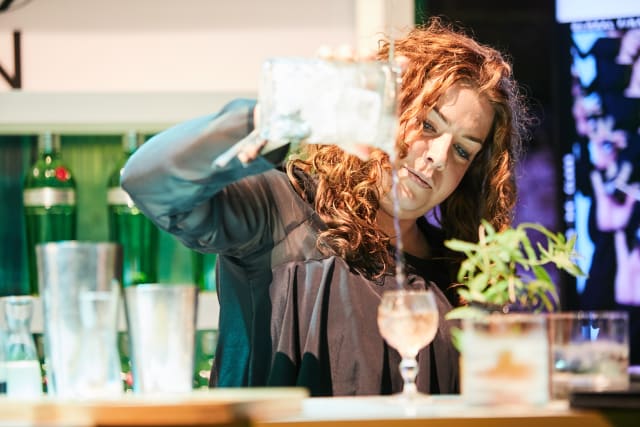 Linda O’Flynn, a passionate advocate of sustainable living, is competing in the global finals of the World Class bartender of the year event, which is being hosted in Glasgow.

On Wednesday, the 28-year-old, who works in Cask bar and restaurant in Cork city, invited judges to sit on a blanket for an imaginary forest picnic as she served up a whisky cocktail flavoured with Irish fig leaf.

“There are lots of strange ingredients that people don’t expect to come from Ireland, so I wanted to give a vibe of exotic flavours from our doorstep,” she said.

“Everything I use is foraged, it’s seasonal, so I wanted to bring that here but mess with them (judges) a little bit.

“So it was about creating something strange with local Irish ingredients.

“With figs firstly we forget they can grow in Ireland and secondly that they do very well.

“They are the powerhouse of the tree. Everything that happens starts at the leaf with the sun. They are taking that energy and passing it through the plant.

“But we don’t ever use it. We don’t understand it. So it’s about trying to delve into plants a little bit deeper.”

Ms O’Flynn almost did not make her big day at the finals, which are being hosted by drinks giant Diageo.

She slept in on Wednesday morning, only waking at 9.20am ahead of her turn before the judges at 10am.

The bartender joked that the frantic dash from the hotel to the SWG3 venue turned out to be the ideal preparation.

“You know what, in the end it was perfect, it took away the stress and let me do what I do and let me be me, rather than planning and preparing,” she said.

“What I do is last minute all of the time.

“So it was like ‘turn up and make it happen’, and I did that, so I’m really happy with the way today went.”

The winner of the World Class finals will be announced on Thursday night.

Ms O’Flynn said victory would enable her to spread her sustainability message even farther.

“It would be crazy,” she said.

“What we are doing, where we are doing it, in this small corner of the world, is sustainable, it’s beautiful, it’s learning the land, it’s spreading that around and taking people in and making them love it.

“So to win would be to tell more people about it, to spread the word and that would be incredible.”