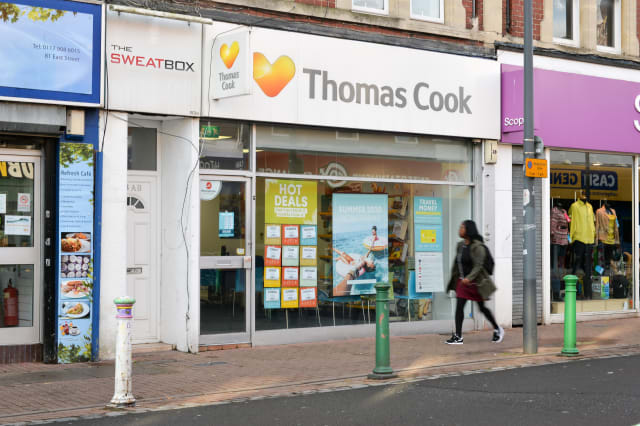 Anger is growing over payments made to Thomas Cook bosses before the firm collapsed.

Directors at the travel company received nearly £50 million in pay and perks over the past decade.

Prime Minister Boris Johnson questioned whether senior managers should pay themselves “large sums of money” as their businesses go “down the tubes”.

Speaking in New York after the launch of a 1,000-flight holidaymaker repatriation operation part-funded by the Government, he said: “I have questions for one about whether it’s right that the directors, or whoever, the board, should pay themselves large sums when businesses can go down the tubes like that.”

He said: “They created this mess and there are large numbers of people losing their jobs.”

Thomas Cook’s demise in the early hours of Monday morning means around 9,000 UK workers face being out of work.

Business Secretary Andrea Leadsom has called on the Insolvency Service (IS) to “fast-track” its investigation of Thomas Cook.

That was 95% of the holidaymakers who were originally booked to fly home on that day.

A further 135,000 passengers are expected to be brought back on rescue flights over the next 13 days, including 16,800 on 74 flights on Tuesday.

The operation is expected to cost approximately £100 million.

Dame Deirdre Hutton, who chairs the CAA, said around 60% of passengers were protected through the Atol scheme.

That means the fund built up from Atol contributions will cover the same percentage of the total bill, leaving taxpayers to make up the remaining 40%.

Dame Deirdre said the repatriation had got off to a “reasonable start”.

She added: “There were some operational difficulties and we’ll continue to have that … there’ll be some bumps in the road and if people could bear with us, but we have got off to a reasonable start which is very good.”

The collapse of Thomas Cook left around one million people with future bookings scrambling to make alternative arrangements, with some accusing rival travel firms of unfairly hiking prices.

David Kirkwood posted screenshots on social media appearing to show how a Jet2.com holiday in Cyprus increased in cost by £800 between 7.30am and 11.30am on Monday.

He described the firm as “soulless”, “money grabbing” and “opportunist”.

A spokeswoman for the company said its pricing is “based on the principle of supply and demand”, adding that it is hoping to increase its flight capacity to help customers.

Thomas Cook customers are being urged to check thomascook.caa.co.uk for further information.