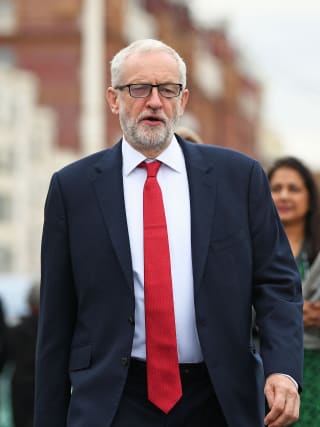 Under the Opposition’s plans, being set out at the Labour conference in Brighton, a two-phase inspection system would be introduced.

The HMIs would carry out inspections in response to concerns arising from the regular “health checks” or those raised by parents, teachers and governors – rather than at random.

Mr Corbyn suggested the new system would be “a more frequent form of supportive investigation”.

But Schools Minister Nick Gibb said the move would stop parents having “the most basic information”, and the Association of School and College Leaders (ASCL) said Labour’s plans represented a “complicated answer” to the issue.

Labour said the system would ensure parents receive the “in-depth and reliable information that they need about our schools” while reducing stress for teachers.

Mr Corbyn told BBC’s Andrew Marr Show: “What we want is an education service that leaves no child behind and gets the best out of everyone.

“You don’t achieve the best by threatening people. We are losing almost as many teachers as we are recruiting every year because of the levels of stress they are under.”

It would also introduce a new statutory definition of a school, and crack down on an estimated 500 illegal schools which fall outside the current inspection system.

Shadow education secretary Angela Rayner said: “In too many cases, Ofsted’s judgments and grades reflect the affluence of a school’s intake and the social class of its pupils – not the performance of the school.

“School performance is far too important and complex to be boiled down to an over-simplified single grade, reducing all schools to one of four categories.

“The current system is unfit for purpose, so the next Labour government will abolish Ofsted and replace it with a system that will give parents the reliable and in-depth information that they need about our schools.”

Mr  Gibb, blasted the idea as “yet another sign of the extreme left-wing ideological drift that Jeremy Corbyn’s Labour Party has taken”.

“Labour are clearly intent on reversing the huge improvements that have been seen, particularly for the most disadvantaged children, by ending academies and free schools,” Mr Gibb said. “Now they want to stop parents having even the most basic information so that they can make informed choices about their children’s schools.

Ofsted’s chief inspector Amanda Spielman said: “Ofsted has been standing up for the interests of children and parents for over a quarter of a century. It’s a cause that inspires everyone who works here.

“In my time so far as chief inspector we have supported children in challenging circumstances through our work tackling illegal schools and off-rolling, and we have shifted the emphasis in education from a narrow focus on exam results onto the real substance of what children are taught in schools.

“This work must continue. So we’ll keep on raising standards in education through our new model of inspection and we’ll continue to keep the most vulnerable in society safe, through our regulation of children’s social care services across England.”

“Ofsted has been a force for lowering school standards by driving teachers from the profession,” she said.

He said: “We all want an inspection system which works as well as possible, but the key to this is to look at how we judge performance fairly and consistently.

“This does not necessarily mean that we need to create new tiers of bureaucracy.”