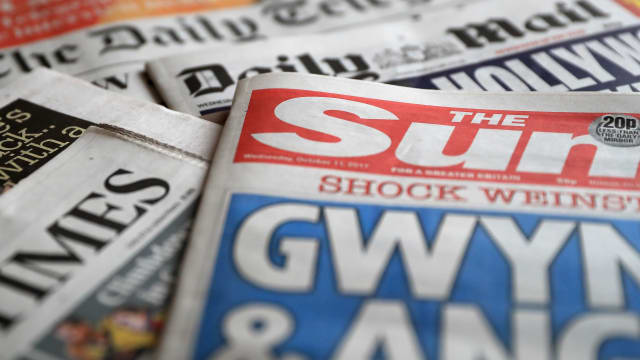 Brexit, as is regularly the case, features on many of Thursday’s front pages .

The Guardian reports Saudi Arabia has said to Donald Trump: here’s our proof – now world must respond to Iran.

The i features a photo of former rugby player Gareth Thomas, who has gone public about his HIV condition, and quotes him as saying “Have the courage
to speak out. Don’t be afraid.”

The Independent says the EU has given Prime Minister Boris Johnson 11 days to propose his new deal.

TheDaily Telegraph‘s lead story is that Jacob Rees-Mogg is urging
supporters of Nigel Farage to return to the Tory fold.

The DailyExpress reports the same Brexit story seen elsewhere, saying Mr Johnson has been warned he has less than two weeks to deliver an acceptable solution, or prepare for a no-deal departure.

The Daily Mirror claims the unsolved murders of four women bear similarities to the two for which Christopher ­Halliwell was jailed.

The Daily Star leads with a story saying “snowflakes have launched a
petition demanding words such as “mare”, “bird” and “wench” be removed from the official English dictionary.

While TheSun says scientists reckon a large eel is what lies behind the Loch Ness monster story.

Metro leads on a plea to “Just sort our NHS”.