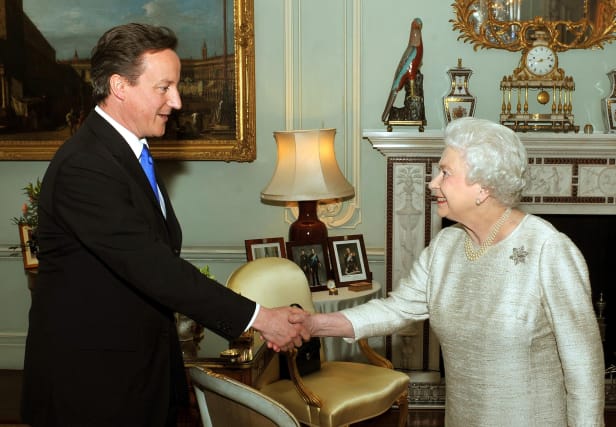 David Cameron sought support from the Queen during the Scottish independence referendum campaign after a poll predicting a Yes victory "panicked" him, the ex-prime minister has said.

Mr Cameron made contact with Buckingham Palace officials in 2014, suggesting the monarch could "raise an eyebrow" in the close-fought campaign.

The former PM said he took the action after he felt a "mounting sense of panic" after a poll put the Yes to independence campaign ahead for the first time while he was staying at Balmoral.

He told the BBC that the poll findings felt like a "blow to the solar plexus" and led to a "mounting sense of panic that this could go the wrong way".

A few days before the referendum in September 2014, the Queen told a well-wisher in Aberdeenshire that she hoped "people would think very carefully about the future".

The comment was seized on by many pro-union campaigners as an indication that the Queen was urging voters to keep the UK together.

Referring to the Queen's remarks, Mr Cameron said: "It was certainly well covered (by the media) ... Although the words were very limited, I think it helped to put a slightly different perception on things."

A documentary about Mr Cameron's time in power also reveals that former chancellor George Osborne believed the Brexit referendum result was partly due to Mr Cameron stoking the idea that "Brussels was to blame".

Mr Osborne told the programme: "We held a referendum we should never have held", and "the consequences for the country are grave".

He attacked Mr Cameron's approach to the issue, saying: "David Cameron was just one of a number of British prime ministers who had fed this idea that we were different than Europe, that Brussels was to blame and that the public ultimately had to have a say, and we've all paid a price for it in my view.

"I feel very sorry for what happened, and I feel responsible, I was the chancellor of the exchequer in that government, we held a referendum we should never have held, we then lost that referendum and the consequences for the country are grave, and the only thing I can plead in my mitigation is that a huge number of people wanted that referendum, and I made a case against it, but it wasn't heard."

Mr Cameron and the ex-chancellor also talked about their attempts to keep Michael Gove on their side in the referendum campaign.

The ex-PM described the "bombshell" moment Mr Gove said he would support the Leave campaign.

Referring to the then PM Mr Cameron, the Chancellor of the Duchy of Lancaster, Mr Gove, said: "Some of the conversations we had were attempts on his part to reassure himself that our friendship would mean that I wouldn't stray from the fold.

"I think David, understandably, felt that since I'd been prepared to knuckle under on a number of occasions beforehand and put my own feelings to one side in order to serve the team, that on this occasion, that I would do the same."

– The first episode of the two part documentary The Cameron Years is broadcast on BBC1 at 9pm on September 19.