The royal rule Kate Middleton has been breaking this whole time 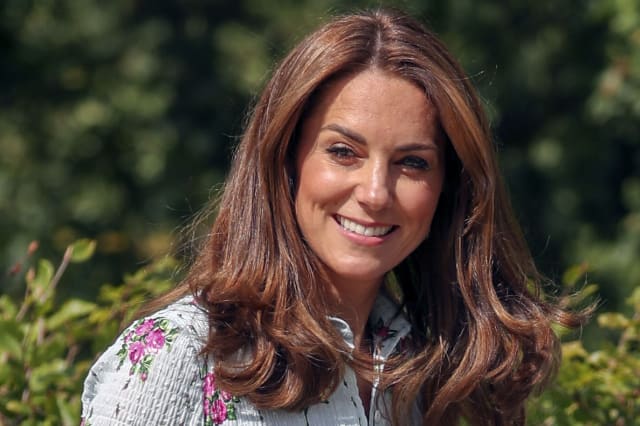 She may not be the Queen of England yet, but Kate Middleton definitely rules the style game. Not only does she have a clever trick for repeating her outfits, but she can even make wearing heels less painful. However, unlike newcomer Meghan Markle, she isn't known for breaking the long list of Queen Elizabeth's rather strict dress codes - except there's one rule she's actually been breaking this whole time.

As per the royal dress code, only natural-looking nails are allowed to be worn at official royal events, and family members are encouraged to keep this up at non-official events as well. The public was surprised when Meghan Markle showed up to the British Fashion Awards in 2019 with dark nail polish, and we haven't seen Queen Elizabeth wear anything but very pale pink nail polish colour for nearly 30 years.

Kate also tends to stick to non-polished nails, or nails polished with nudes or pale pinks. On her wedding day, Kate wore a light pink shade, mixing Bourjois Rose Lounge and Essie Allure to create an original hue. As it turns out, despite her general love of pale polishes, she isn't always seen with just pale or natural nails.

Since 2012, Kate Middleton has been photographed multiple times sporting a deep red nail polish. How did we not notice? She only wears the darker shades on her toes! Mixing the non-royal approved pedicure with her favourite nude manicure, Kate has been getting away with breaking this royal rule for years.

12 times the royals broke their own protocol

The People’s Princess is most remembered for her frank, approachable attitude. She openly discussed her eating disorder and the importance of mental health. She met HIV positive patients and hugged them. She gave candid interviews about her failing marriage with Prince Charles. While her manner of conduct was not expected from a member of the royal family, it was very much appreciated by the public.

We already know Princess Diana had an incredible sense of fashion, and her taste in jewelry is no exception. After Prince Charles proposed, she got an engagement ring with a 12-carat oval blue sapphire surrounded by 14 solitaire diamonds. However, she didn’t get it custom made as royal brides-to-be usually do. She selected hers from a Garrard jewelry collection catalog. Critics called it the “commoner’s sapphire” for that reason, even though it looks anything but common. Prince William used that exact ring when he proposed to Kate Middleton, and the Duchess still wears it today. Check out these photos of times Princess Diana and Kate Middleton basically wore the same outfit.

When Princess Diana sent her son to public school

With this year marking the 20th anniversary of her death, rare photos of Princess Diana and her sons are surfacing across the Internet. They capture just how hands-on she was as a mother. She took them to amusement parks, they ate at McDonald’s together, and maybe most surprisingly, she sent them to public school. When Prince William started at Mrs. Jane Mynor’s nursery school at age 3, he became the first heir to the British throne to not start his education within the palace. Prince Harry later joined him at the same school.

When Prince William comforted a commoner

Prince William certainly inherited his mother’s compassion for the people of her country. In June 2017, he and the Queen visited a crisis center where survivors of the Grenfell Tower fire were being treated. The deadly blaze destroyed the North London apartment complex and killed 79 people. At the center, William met a woman trying to find her husband who’d been trapped in the burning building. The royal code states that male members of the royal family should be greeted with a nod or “neck bow.” As the Daily Mail explains, that didn’t happen: “The woman sobbed into the concerned Prince's chest as he put his arms around her and told her he would do everything he could to help find her loved one.” Here's another royal rule that Prince William and Kate Middleton always break.

When Prince Harry petted a dog

We all secretly want to be every dog’s favorite human—and it looks like Prince Harry has the same ambitions. At the 2015 Royal Variety Performance, a televised variety show that raises money for the Royal Variety Charity, Prince Harry should have gone back to his security detail after meeting the acts. Instead, he gave into the universally human urge and petted the performing dog Matisse, a border collie who wonBritain’s Got Talent earlier that year. His owner and trainer Jules O’Dwyer told The Sun that Prince Harry “actually broke protocol on his way out. It’s great that Matisse has got the royal seal of approval.”

When Prince William flew with his kids

Remember those adorable photos of Prince George and his dad on the royal tour? They should have never been taken—not because we don’t melt at the young prince’s pouty face, but it’s standard royal practice for anyone in succession to the throne to travel separately in case of an accident. If something were to happen to one person, their royal lineage would be preserved. This isn’t part of official royal protocol, and Prince William did get permission from the Queen to have his whole family travel together.

OK, Queen Elizabeth II herself didn’t break protocol. She more than anyone should know the do’s and don’t’s of royal etiquette. Earlier this year, Her Majesty visited into Canada House in London to celebrate Canada’s 150th birthday. When Canada’s Governor General David Johnston was walking her in and out of the building, he touched her arm and started a media frenzy. Aside from handshakes, touching members of the Royal family is extremely rare, but Johnston said he was just lending a helping hand. “There was carpet that was a little slippy,” he told CBC News, “and so I thought perhaps it was appropriate to breach protocol just to be sure that there was no stumble." Considering the situation, it seems appropriate to let the Governor-General’s actions slide.

Kate Middleton already channels Princess Diana in their strikingly similar outfits, so it makes sense that she would have the same caring attitude toward young children. While stopping at Strassenkinder, a charity in Germany that helps kids with disadvantaged backgrounds, Kate greeted a group of little ones with loving hugs, disregarding the “handshakes only” rule. Here are some more surprising etiquette rules you didn't know the royal family had to follow.

Yes, that actually happened. Among the royal family’s important jobs is recognizing talented Brits who are doing their country proud. Apparently, that includes getting behind-the-scenes access to one of the biggest movie franchises ever. Princes William and Harry got a special tour of the Star Wars: Episode VIII set in England while it was being filmed. Between chatting with Daisy Ridley and John Boyega and meeting BB-8, they got big Wookie hugs from Chewbacca. They also had their own lightsaber battle. Jealous yet? We are.

Are you seeing a pattern here? At Buckingham Palace’s G20 Summit in 2009, the Queen spent time talking to then-First Lady Michelle Obama, even joking about their height difference. Then the Queen put a hand on Mrs. Obama’s back and the First Lady returned the gesture in what can only be described as a “power side hug.” The royals showing increasingly more leniency with hugging is basically them saying, “This is 2017, people. Hugs make the world go ‘round.”

When Prince Charles signed an autograph

A new poll shows that Prince Charles is decidedly the least popular member of the royal family, but no one can deny that the ex-husband of Princess Diana has a soft side. In 2010, he met with victims of devastating flash floods in Cornwall and a couple asked him for an autograph for their son. Shockingly, Charles agreed and had a bodyguard get him a piece of paper. The royal family is actually banned from giving autographs for a very good reason, but Charles made an exception for this unfortunate family. Learn more about why the royal family isn't supposed to sign autographs.

The main changes as Scotland enters phase one of easing lockdown