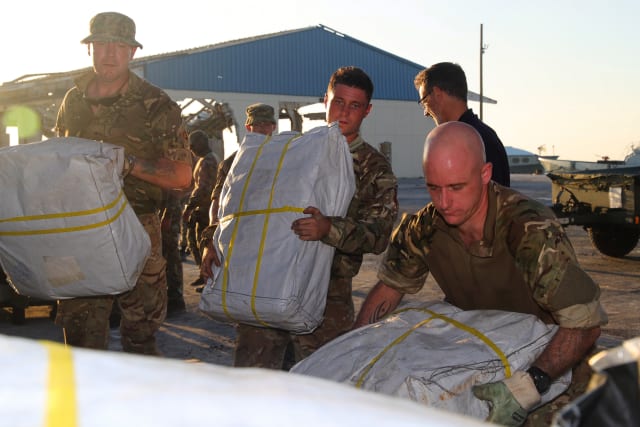 The Royal Navy has deployed extra medics and is sending another ship to deliver humanitarian assistance to the Bahamas following Hurricane Dorian, the Ministry of Defence has said.

At least 43 people were killed, with fears the death toll could rise, after the storm battered the Abaco and Grand Bahama islands with winds of up to 185mph winds and lashing rain.

The roofs of homes were ripped off, roads damaged and debris left floating in brown floodwater, with one local relief worker describing “apocalyptic” scenes.

The British Government has pledged £1.5 million to help deliver aid, saying it is estimated that several hundred British nationals live in the worst affected areas of the Bahamas.

The Royal Navy has deployed extra medics to join Royal Fleet Auxiliary ship Mounts Bay, with a team of 18 arriving in the region on Saturday.

Lieutenant Commander Anna De-Saint, who is commanding the team, said: “It is absolutely essential that teams like us and the humanitarian teams already in the region are ready to respond to an emergency like this at short notice.

“We are held at 48 hours notice to move, so we are a high-readiness unit who are available to go at short notice anywhere in the world.

“During hurricane season we know there is a higher chance of us being needed, but we have not had to deal with a situation like this since Operation Ruman – the UK’s military response to Hurricane Irma in the Caribbean in 2017.”

Another ship, HMS Protector, will head to the Bahamas on Monday after loading food, water and clothing in Bermuda.

The Navy has so far provided emergency shelter and hygiene kits for hundreds of people, more than 8,000 bottles of water and hundreds of days worth of food.

Defence Secretary Ben Wallace said: “The devastation wrought by Hurricane Dorian has required an urgent response and the UK’s commitment to the Caribbean means that our Royal Navy is on hand to help.

“As part of this quick response, we’re working closely with our US counterparts in delivering assistance to the Bahamas.

“Our thoughts remain with those affected and those who have lost loved ones and homes.”

The hurricane moved off towards Florida, having left a trail of devastation in its wake in the Bahamas.

Although it has weakened in strength, it has still caused serious flooding in the US.

The Foreign Office has advised against all travel to Grand Bahama and the Abaco Islands due to the impact of the hurricane.