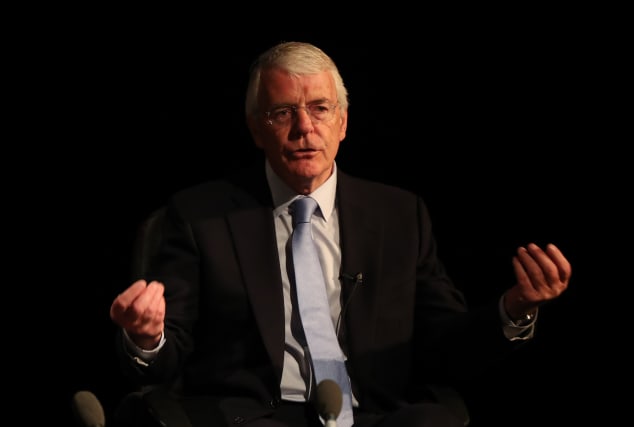 Sir John Major has launched a savage attack on Boris Johnson and his Government – urging the new Prime Minister to ditch his “overmighty advisers” before politics is poisoned “beyond repair”.

The former prime minister accused the Government of operating via “bluster and threat in a climate of aggressive bullying”, as he criticised the PM over the controversial decision to prorogue Parliament.

He also demanded the 21 rebel Tory MPs who voted against the Government on Tuesday night should be reinstated.

Failure to do this would mean the Conservatives would “cease to be a broadbased nations party, and be seen as a mean minded sect”, Sir John said.

The former Tory leader hit out in a speech to business leaders in Glasgow, in which he condemned the “abuse” inflicted upon supporters of the European Union.

Sir John said he “never thought” he would see such behaviour from “any British government” as he insisted: “It must stop.”

The former prime minister said: “The abuse comes from cabinet ministers, and the threats from Number 10 special advisers.

With the UK “being torn apart by the divisions of Brexit”, Sir John said that the country faced “many challenges”.

Speaking at the CBI Scotland annual dinner in Glasgow he added: “If we are to meet them we need government of the highest quality, not government by bluster and threat, in a climate of aggressive bullying.”

While he made no reference by name to Dominic Cummings, the former Vote Leave campaign director who is now an adviser to the PM, he said politicians had “seen overmighty advisers before”.

Sir John continued: “It is a familiar script. It always ends badly.

“I offer the Prime Minister some friendly advice: get rid of these advisers before they poison the political atmosphere beyond repair. And do it quickly.”

Referring to Sonia Khan, an adviser to Chancellor Sajid Savid who was escorted out by police officers after being sacked, he added: “There is no need for them to be led out of Downing Street by armed police, but go they should. And now.”

Continuing his attack on the PM, he claimed Mr Johnson’s cabinet “has no majority and no mandate” – but added that this was “not the only impediment to its moral authority to change the whole direction of our country”.

Sir John described Mrs Johnson’s front bench team as being “chalk and cheese in character” to the government elected two years ago, led by Theresa May.

He stated: “It is not a cabinet of all the talents. It is a faction of a faction, with no counter balance of opinion to hold it back.

“This is a cabinet committed to deliver Brexit ‘do or die’, ‘come what may’ as the Prime Minister puts it. they are pledged to this. Their seat at the cabinet table depends upon accepting whatever deal the inner core of hardline Brexiteers decide upon.”

This group of ministers have “redefined Brexit into the hardest and most uncompromising breach with Europe”, he added.

Sir John said he was “absolutely clear” that “there is no electoral mandate – nor has there ever been- for a no-deal Brexit”.

And he voiced his fear that Brexit would “unsettle the unity of our UK” – adding that the “risk of separation is growing”.

Although he said Scottish independence was “not inevitable” he added that if Scotland was to break away it would “weaken every part of the United Kingdom, including Scotland”.

While he said he could “fully understand why Scotland has reasons for grievance”, with voters north of the border having overwhelmingly backed staying in the EU, he added this did not “overcome the problems of independence”.