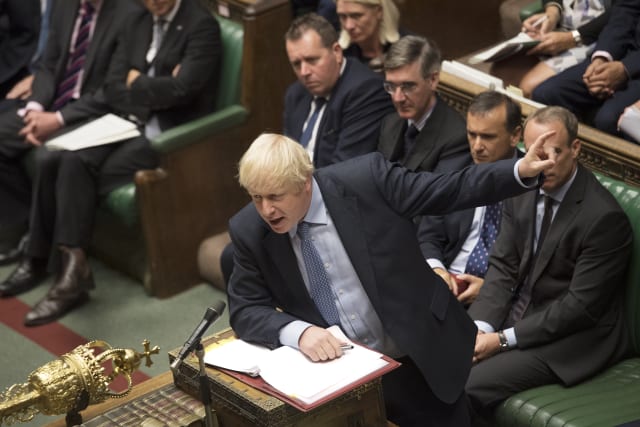 Boris Johnson’s snap general election plan has been roundly rejected after his bid to keep a no-deal Brexit on the table suffered a major blow.

The Prime Minister had called for a poll to be held on October 15 after legislation designed to prevent the UK crashing out of the EU on October 31 cleared the Commons.

But Labour and other opposition MPs refused to back the bid – which needed a two-thirds majority in the Commons – while the risk of a no-deal remained.

The Government failed to secure the support of two-thirds of MPs, with the Commons voting 298 to 55, 136 short of the number needed.

In a series of setbacks, MPs approved a backbench Bill earlier in the evening to delay Brexit in order to prevent a no-deal withdrawal from the EU on October 31.

It cleared the Commons when it passed its third reading by 327 votes to 299, majority 28, and should now progress to the Lords.

Following a moment of confusion, an amendment seeking to give MPs a vote on Theresa May’s final Brexit deal was also passed – potentially paving the way for it to be put before the Commons for the first time.

Labour MP Stephen Kinnock’s amendment was approved after tellers for those voting against the amendment were not put forward during voting.

A Government source said it was a “free vote so no one put tellers in”.

Mrs May’s final offer, the Withdrawal Agreement Bill, emerged from cross-party talks earlier this year, but was never put before Parliament because she was ousted as Tory leader.

Tory former Cabinet minister Dame Caroline Spelman became the latest MP to rebel against the Government, when she backed the Bill at its second and third reading, but will not have the party whip withdrawn.

Labour leader Jeremy Corbyn said the Bill must be passed through the Lords and have received Royal Assent before he would entertain the thought of heading to the polls.

He said: “Let the Bill pass and have Royal Assent and then we can have a general election.”

A Downing Street spokesman earlier said the PM would not resign to force a general election if the Government lost the Commons vote, telling a Westminster briefing: “He’s not going to step down. He wants an election.

“We will find a way to deliver on what the British people want, which is to deliver Brexit by October 31.

“If the PM cannot get the Bill through Parliament because Parliament is determined to wreck the negotiations, the only other option then is a general election.”