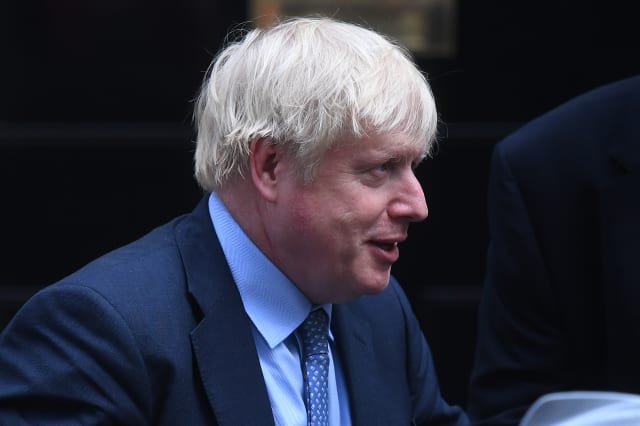 Downing Street has rejected suggestions Boris Johnson will resign to trigger a general election in a bid to block efforts to delay Brexit.

The Prime Minister has hinted Jeremy Corbyn is running scared from the ballot box after the Labour leader made clear he would not back a poll until a no-deal exit was taken off the table.

MPs are considering a backbench Bill to delay Brexit in order to prevent a no-deal withdrawal from the European Union on October 31 after Mr Johnson was defeated in his first Commons vote as Prime Minister on Tuesday night.

They are then expected to vote on triggering an early general election – which without Labour support is unlikely to reach the required two-thirds majority in the Commons.

A Downing Street spokesman said the PM will not resign to force the country to head to the polls if the Government loses the Commons vote, telling a Westminster briefing: "He's not going to step down. He wants an election.

"We will find a way to deliver on what the British people want, which is to deliver Brexit by October 31.

"If the PM cannot get the Bill through Parliament because Parliament is determined to wreck the negotiations, the only other option then is a general election."

The spokesman refused to say what steps the Government would take to secure a general election if it loses a vote on calling a ballot, but said Mr Johnson believes going back to the public is the only option if Parliament votes to delay Brexit.

At his first Prime Minister's Questions, Mr Johnson called it a "surrender Bill" which would "wreck any chance of the talks" to achieve a new deal with Brussels.

The Prime Minister has insisted he will not ask for a delay beyond October 31, and challenged Mr Corbyn: "Can he confirm now that he will allow the people of this country to decide on what he is giving up in their name with a general election on October 15 – or is he frit?"

Mr Corbyn questioned the Prime Minister over reports that his strategy in Brexit talks is to "run down the clock" ahead of the deadline.

Meanwhile, the Prime Minister faced a backlash over his decision to throw Tory rebels out of the parliamentary party after their disloyalty in Tuesday night's vote.

Mr Johnson removed the whip from 21 Conservative MPs after they voted against the Government in order to allow time for the backbench Bill to be debated on Wednesday.

Those sacked include Philip Hammond, David Gauke and Rory Stewart – all of whom were serving in Theresa May's Cabinet just weeks ago. Party stalwarts Ken Clarke and Sir Nicholas Soames, Winston Churchill's grandson, were also dismissed.

Former Scottish Tory leader Ruth Davidson said on Twitter: "How, in the name of all that is good and holy, is there no longer room in the Conservative Party for @NSoames? #anofficerandagentleman."

Former Tory Party chairman Lord Kenneth Baker said: "These 21 MPs are not parvenus seeking to infiltrate the party, they are lifelong Tories in their mind and in their bones."

He warned the party owes its success to being a broad church which had kept policy decisions out of the hands of "swivel-eyed ideologues", and called for the 21 to be allowed to stand again for the Conservatives at the next election.

He told BBC Radio 4's Today programme: "It was very clearly stated that Conservative MPs would lose the whip.

"Now 21 of them out of 312 – that is about 6% – chose to vote against the Government and they had the whip withdrawn.

"I think it is a shame – a lot of them are very talented people. But you cannot have people standing as Conservative MPs when they are against the Government's policy on the key issue of the day."

Mr Stewart, who was a candidate in the recent Tory leadership race, said he was told about the decision to withdraw the whip by text message.

He called it an "astonishing moment" at the end of what has been a hectic six-week period for the Penrith and the Border MP, after his high-profile leadership bid.

"It feels a little bit like something you associate with other countries – one opposes the leader, one loses the leadership race, no longer in the cabinet and now apparently thrown out of the party and one's seat too," he said.