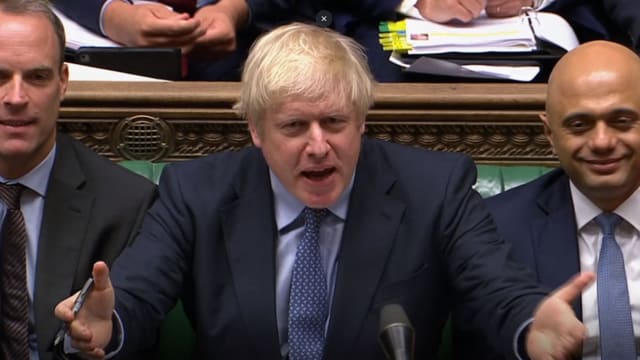 Boris Johnson has confirmed his desire to hold a general election on October 15 – as he looks set to be defeated on a crunch vote on his plan.

After legislation designed to prevent a no-deal Brexit cleared the Commons, the Prime Minister told MPs that the country must go to the polls next month to decide who to send to Brussels to “sort this out”.

Mr Johnson, opening a debate on triggering an early general election, said: “I think it’s very sad that MPs have voted like this, I do, I think it’s a great dereliction of their democratic duty.

“But if I’m still Prime Minister after Tuesday October 15, then we will leave on October 31 with, I hope, a much better deal.”

However, his bid is unlikely to succeed at this stage without Labour support to reach the required two-thirds majority in the Commons.

Moments earlier, MPs approved a backbench Bill to delay Brexit in order to prevent a no-deal withdrawal from the European Union on October 31 after Mr Johnson suffered further parliamentary defeats on Wednesday.

It cleared the Commons when it passed its third reading by 327 votes to 299, majority 28, and should now progress to the Lords – but the timings for that debate remain unclear.

Following a moment of confusion, an amendment seeking to give MPs a vote on Theresa May’s final Brexit deal was also passed.

Labour MP Stephen Kinnock’s amendment was approved after tellers for those voting against the amendment were not put forward during voting.

A Government source said it was a “free vote so no one put tellers in”.

Mrs May’s final offer, the Withdrawal Agreement Bill, emerged from cross-party talks earlier this year, but was never put before Parliament because she was ousted as Tory leader.

Tory former Cabinet minister Dame Caroline Spelman became the latest MP to rebel against the Government, when she backed the Bill at its second reading, but will not have the party whip withdrawn.