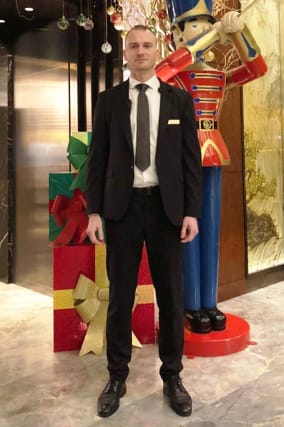 The fiancee of a bouncer stabbed to death outside an exclusive Mayfair mansion party has appealed for help to catch his suspected murderer.

Tudor Simionov, 33, was attacked when he went to the aid of colleagues working on the door of an unlicensed bash on Park Lane in the early hours of New Year’s Day.

Jurors heard how champagne, cognac and brandy had been laid on for the £2,000 a table entry fee with plates of cocaine said to be openly snorted by guests.

A group of gatecrashers, including the alleged knifeman Ossama Hamed, turned violent on being refused entry to the event organised by Lord Edward Davenport, the Old Bailey heard.

During the brawl caught on mobile phone footage, Mr Simionov was stabbed in the chest and five other members of staff were injured.

The next day, Hamed, 26, from Hillingdon, fled the country bound for Morocco and remains wanted by Scotland Yard for murder, wounding and violent disorder.

Unemployed Adam Khalil, 21, from Kingsbury, north-west London, and Haroon Akram, 26, from Fulham, pleaded guilty to Mr Simionov’s manslaughter on the second day of their trial.

Barber Nor Hamada, from Wembley,  was found guilty of violent disorder but jurors were unable to reach a verdict on a murder charge.

Adham El Shalakany, 24, from Hammersmith, was cleared violent disorder and Hamed’s girlfriend Shaymaa Lamrani, 26, of Ealing, who was accused of throwing away Hamed’s knife, was found not guilty of perverting the course of justice.

The 23-year-old Romanian said:  “I am pleased those involved have been convicted but we must now keep working to find Ossama Hamed who remains on the run from police.

“Nothing can change the past and we cannot bring Tudor back, but finding Ossama Hamed and bringing him to justice will help me find closure after all that has happened.

“I would ask anyone who has any information on his whereabouts to speak to police as soon as possible. Imagine how you would feel knowing one of those involved in the death of your loved one was still walking free.

“Someone, somewhere must know where he is.”

She went on: “Tudor and I met three years ago at university in Romania and in October 2018 moved to London to start a new life.

“Tudor was a professional rower who had been successful in many competitions. He believed that moving to England would be an opportunity to focus on his sport.

“On 31 December 2018, Tudor had gone to work as normal when his life was suddenly taken away. He just happened to be in the wrong place at the wrong time; he was simply unlucky.

“Tudor was only 33 years old and we had planned our whole lives together. He was always thinking about everyone else and putting others first. He was the kindest person I knew and by losing him, I have lost everything.

“We were meant to be getting married this summer but instead of attending our wedding, I have been attending court.

He said: “We believe Ossama Hamed played a significant role in this attack and we are determined to find him and get Tudor’s family the justice they deserve.

“Anyone who thinks they may know his whereabouts or has any information which could help lead us to him is urged to call the incident room on 0208 358 0300.”