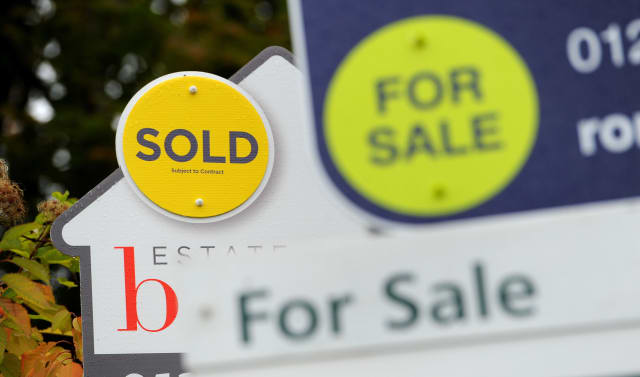 House-sellers across England and Wales are shaving £8,000 off their initial asking price typically to make a sale – and more than £100,000 in some areas – according to analysis.

Zoopla said homes are achieving 96.3% of their asking price on average.

It compared listing data with Land Registry sales figures between June 2018 and May 2019 to make the findings.

It said the discount of nearly 4% equates to around £8,000, based on average house prices.

But in some places, sellers have typically been achieving their full asking price, the research found.

Sellers achieved 100% of their asking price on average in three areas – Salford, Driffield in the East Riding of Yorkshire, and Dronfield in Derbyshire.

Some buyers may end up paying more than the original asking price for popular properties, while elsewhere sellers may achieve slightly less than they had wanted.

Sheffield, Droitwich and Altrincham were also hotspots where house-sellers had typically achieved close sums to their asking price.

Zoopla’s research, which excluded London from the main findings, also identified Mountain Ash in South Wales as the most under-performing town when comparing listing prices with the eventual price achieved.

Properties achieved 91.5% of the initial asking price, representing a £6,500 discount on the average property price there.

Close behind was Abertillery, also in Wales, where homes achieved 91.7% of the asking price typically, while homes in Bishop Auckland in the North East of England generated 91.8% of the initial listing price on average.

As well as the main findings, Zoopla also looked at London separately.

It found that, within the capital, Waltham Forest was the best performer, with homes achieving 97.9% of the initial asking price.

Camden was identified as the weakest performing borough within London – with properties there achieving 91% of the listing price on average.

In Kensington, the average discount is £115,000, with sellers achieving 91.7% of their asking price of nearly £1.4 million typically, Zoopla said.

Across London, the average home achieved 94.6% of its initial asking price.

Zoopla spokeswoman Laura Howard said the relatively close relationship between initial listing and final sale prices, even in areas considered to be under-performing, “points to a healthy and robust property market in which estate agents and sellers alike are well-versed in and realistic about property values”.

She continued: “Crucially, it’s this which helps to keep the wheels of the UK housing market well oiled and turning independently, and in spite of, the wider more uncertain political factors currently at play.”