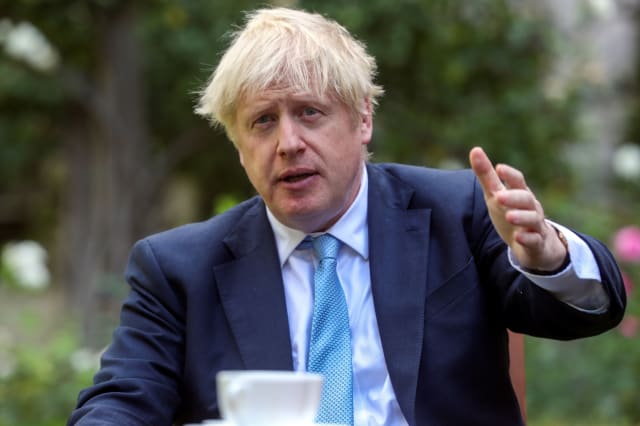 Downing Street has warned MPs that it would be "entirely unreasonable" for them to attempt to "bind the hands" of the Prime Minister as he seeks to negotiate a new Brexit deal.

Boris Johnson has put rebels within his party on notice that they face losing the whip and being barred from standing for the Tories if they vote against the Government.

The PM has called a meeting of his Cabinet on Monday afternoon to consider how to respond to the possibility of MPs seeking to take control of Commons business.

It has sparked feverish speculation about the prospect of a general election being called within days if the Government loses the expected Commons vote on Tuesday.

A Downing Street source said: "They will discuss Government's response to MPs seeking to take control of legislative agenda away from Government and handing it to the opposition and Corbyn without the consent of the people."

The view from Number 10 is that the expected vote on Tuesday is "an expression of confidence in (the) Government's negotiating position to secure a deal and will be treated as such".

The Prime Minister is also hosting all Tory MPs at Number 10 on Monday evening for a gathering which could prove awkward given the threat to remove the whip from rebels.

His official spokesman earlier told a Westminster briefing that the UK would leave the EU "whatever the circumstances" on October 31.

He added: "The Prime Minister has said from the start that he will be energetic in pursuit of a deal. We have put forward reasonable proposals and the PM and his team have been discussing these with EU leaders and the commission over the summer recess.

"It would be entirely unreasonable for MPs – having rejected the previous deal three times – to attempt to bind the hands of the Prime Minister as he seeks to negotiate a deal they can support ahead of EU Council in October."

Earlier, Mr Johnson was accused of "goading" some Tory MPs to rebel so he can force a snap general election having purged opponents of a no-deal Brexit from the party.

Mr Gauke, the leader of the so-called "Gaukeward squad" of Tory rebels, said the Prime Minister's move was an "unusual" and "particularly confrontational" approach.

And he told BBC Radio 4's Today programme that he has not been subject to the usual "cajoling" from Cabinet allies to urge him to support the Government's line.

"I don't think there seems to be a huge effort to persuade people to support the Government this week. I think they seem to be quite prepared for there to be a rebellion, then to purge those who support the rebellion from the party," he said.

"None of that is happening. The usual operation isn't particularly happening. It does seem to me they are almost goading people into voting against the Government.

"Because I think the strategy, to be honest, is to lose this week and then seek a general election having removed those of us who are not against Brexit, not against leaving the European Union, but believe we should do so with a deal."

Mr Gauke also said he has taken the extraordinary move of writing to Attorney General Geoffrey Cox and Lord Chancellor Robert Buckland, asking them to confirm whether the Government believes in the rule of law.

The backbencher's letter came after Chancellor of the Duchy of Lancaster Michael Gove refused to confirm whether ministers would abide by any no-deal prevention law passed.

Mr Gauke said: "The rule of law is hugely important to this country and I am concerned by some of the briefings that have been put out by the Government suggesting that they won't comply with the law, and I think Michael was equivocal on that question yesterday."

"I think that it is important for the Government to establish the House of Commons and that this is essentially a confidence matter," he told LBC Radio.

"Is there really a Conservative in this country who thinks that Jeremy Corbyn should control our legislative agenda?"

Schools Minister Nick Gibb told Today that the whips were making it clear that it is "a very serious issue" to "undermine our negotiating position" by blocking a no-deal.

Tory MP Antoinette Sandbach said she was willing to put her job on the line to vote against the Government and accused Mr Johnson of hypocrisy for twice rebelling by voting against Theresa May's Withdrawal Agreement.

"I find it staggeringly hypocritical that he's threatening to take the whip away," Ms Sandbach told Sky News.

"If that had happened to him when he voted against Theresa May's deal, he wouldn't have had the opportunity to stand to be Prime Minister of this country."

First they said the leader of the party had to be a no dealer, then they said every minister had to sign the no deal pledge to serve. Now every MP who votes against no deal chaos could be purged. We've come a long way in a very short space of time...this is not real Conservatism https://t.co/qFSt6ane2l

MPs are being warned to back the Government when Remainers and those who want to leave the European Union with a deal attempt to seize control of the parliamentary agenda on Tuesday.

They will try to pass legislation to prevent leaving the European Union without an agreement in place.

But Conservative MPs are being told by whips that they will be barred from running for the party in an election if they do not back the Government, as part of Mr Johnson's "do or die" approach to delivering Brexit by the October 31 deadline.

With the Tories having a majority of just one with the DUP's support, removing the whip from rebels would further weaken his hold on Parliament and increase the chances of an election.

A meeting between the PM and rebels, including Mr Gauke, had been scheduled for Monday but was abruptly cancelled by Downing Street.

Meanwhile, Mr Corbyn was to hold a special meeting of the shadow cabinet in Salford to finalise tactics for opposing a no-deal Brexit.

The Labour leader will say: "We are working with other parties to do everything necessary to pull our country back from the brink."

And former prime minister Tony Blair used a speech in London to urge Labour not to support any push by Downing Street for an early general election, but demand a Brexit referendum instead.