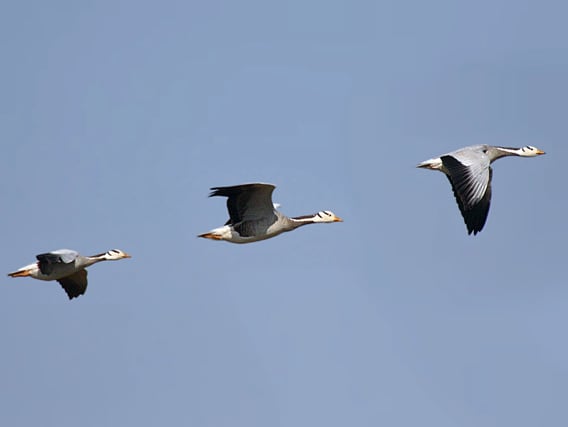 Climate change is causing geese to alter their migration habits, according to scientists.

The birds have adapted their route from the UK to Norway over the last 25 years, stopping farther north in response to the global warming, researchers from the University of St Andrews have found.

Scientists said barnacle geese – which traditionally stop to rest and eat just south of the Arctic Circle in Norway during their journey from the UK to their breeding grounds on Svalbard, now mainly fuel up in northern Norway – far above the Arctic Circle.

The 45-year study, conducted in collaboration with Norwegian, Dutch and British colleagues, argues geese have shifted their migratory route over the past quarter of a century because of climate change.

Scientists said the study is among the first to provide hard evidence that wild animals are inventing new traditions to cope with climate change.

Dr Thomas Oudman, of the School of Biology at the University of St Andrews, said: “It makes sense that the birds went even further north because where snow used to be very common there at the time of their arrival in Norway, these days it is often freshly green there – the most nutritious stage.

“What surprised us is that it is mainly the young geese who have shifted.

“The youngsters are responding to a trend they could not have experienced during their short life.”

Adult geese are also increasingly shifting north, although they often return to the traditional area in their old age, researchers found.

The conclusions are based on analysis of 45 years of observations by the Norwegian Institute for Nature Research, the University of St Andrews, the University of Groningen in the Netherlands, BirdLife Norway and the British Wildfowl and Wetlands Trust.

Experts say that, unlike most other migratory birds, barnacle geese flourish even while their natural habitat is rapidly changing due to the availability of alternative places with sufficient food at the right time and without the threat of disturbance from humans or other dangerous animals.

The availability of alternative habitats may also help other animals to adapt to climate change, but species which are less sociable or explore less may take much longer to discover such places.