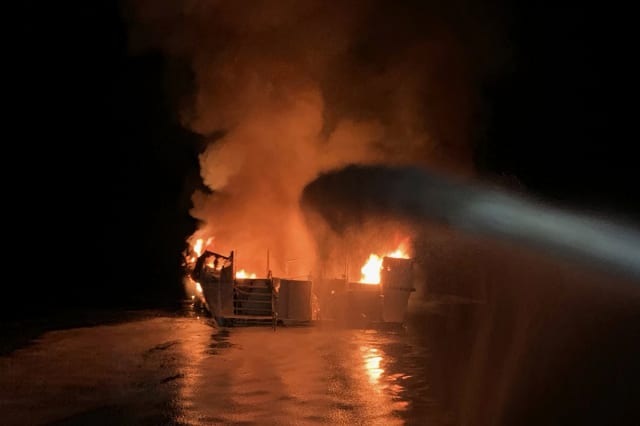 At least 34 people are feared dead after a diving boat burst into flames off the coast of California early Monday morning, officials have confirmed.

The fire is thought to have broken out just before 5am (11am GMT) near Santa Cruz Island, close to Los Angeles.

Five crew members managed to escape the vessel while one is being treated for a broken leg, reports from the area said.

The captain of the boat was helping with the rescue. Four other people were rescued.

It is unclear why the boat was out so early in the morning or who was on board at the time of the fire.

The rest remain "unaccounted for".

Emergency services are at the scene and are attempting to put out the fire which "fully engulfed" the boat.

"The Coast Guard has launched multiple rescue assets along with assets from local agencies to assist more than 30 people in distress on a 75ft boat near Santa Cruz Island," the Coastguard Tweeted.

Ventura County officials say multiple people have died but the US Coast Guard is yet to confirm fatalities.

Coast Guard Senior Chief Aaron Bemis told CNN the fire on the boat keeps re-flashing, hampering efforts to board the boat and look for survivors.

"Multiple coast guard and local Ventura County Fire Department assets on scene, but we're not able to yet breach the hull and see if there's any survivors at this point," Mr Bemis said.

"I'm unaware of any survivors at this time, and I'm also no confirmed casualties at this time. It's too early to tell."

"It's a 75-foot commercial dive vessel that reportedly had 39 people on board. The five crew members able to disembark because they were in the main cabin. The 34 passengers were below decks," he added.

"The report we got was they were trapped by the fire. The fire was so intense that even after it was put out, we're not able to actually embark the vessel and, you know, look for survivors at this point. It's still ongoing."