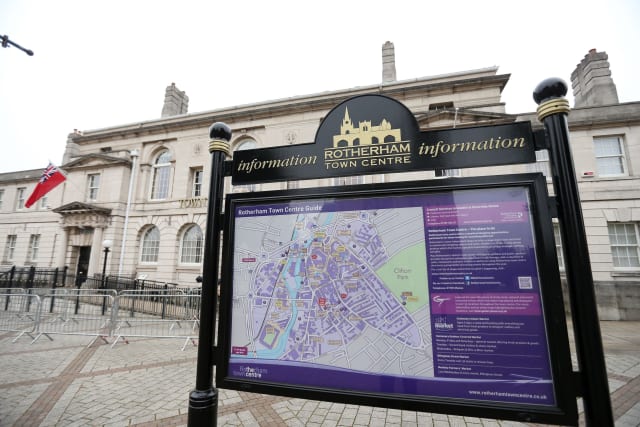 Authorities were “totally ineffectual” or “wholly indifferent” to the plight of sexually exploited teenage girls in Rotherham, a judge said as he jailed five men for between four and 24 years.

Aftab Hussain, 40, was sentenced to 24 years in prison, and Abid Saddiq, 38, to 20 years by the judge at Sheffield Crown Court, who described Saddiq as a “cunning and determined sexual predator”.

Masaued Malik, 35, was jailed for five years; Sharaz Hussain, 35, for four years; and one man who cannot be named for legal reasons was jailed for 10 years.

Malik was told that his sentence will follow on from a 15-year term he is already serving for similar offences.

Judge Michael Slater said that, after sitting through the trial of the five men, he was “quite satisfied” that the “relevant authorities” were well aware of the way vulnerable teenagers in the South Yorkshire town were being targeted for sexual exploitation more than a decade ago.

Judge Slater described this as a “lamentable state of affairs”, saying that the authorities at the time were at best “totally ineffectual” and, at worst “wholly indifferent”.

Friday’s sentencing followed the latest trial to arise out of Operation Stovewood – the massive National Crime Agency (NCA) investigation into the sexual exploitation of teenagers in Rotherham between 1997 and 2013.

A total of 20 men have now been convicted as a result of Operation Stovewood and the NCA has said it believes 1,510 people were victims in the town.

Judge Slater praised the eight victims mentioned in Friday’s hearing, including one who sat in court for the sentencing and who said in a statement read to the court: “They took my childhood away.”

The judge said: “Nothing I can say to you can restore those childhoods of which you were so cruelly deprived by the actions of these defendants and others.”

He added that he was “particularly concerned” to hear that a number of complainants “expressed feelings of shame, guilt and self-loathing in relation to what happened to her and by extension to her family”.

He told the victims: “It seems to me the time for such wholly unjustified but understandable self-criticism and soul searching is over.”

The judge said the women should instead be praised for the “incredible resolve and bravery” they each showed to bring the men to justice and how they “stood up to ensure that what happened to her should never happened to young girls in the future”.

During the five-week trial, the jury heard that girls were targeted due their vulnerability and were given alcohol and drugs before some were raped by multiple men.

Violence was sometimes used to ensure they complied, the court was told.

Referring to the defendant who cannot be named for legal reasons, the judge said: “I cannot think of a worse violation of a young girl by those who purported to be her friends.”

Another man who cannot be named for legal reasons, who was also found guilty of offences earlier this week, will be sentenced at a later date, as will a seventh defendant, Mohammed Ashan, who pleaded guilty to sex offences at a previous hearing.

The NCA was invited in following the Jay Report which shocked the nation in 2014 when it outlined the scale of the offending against children in the town.

The agency now has more than 200 people working on Operation Stovewood, which had a budget last year of just under £12 million, and is looking to increase this as it works towards recruiting a staff of 250.

The agency said it has now engaged with 313 victims and survivors in the town and has identified 190 suspects.