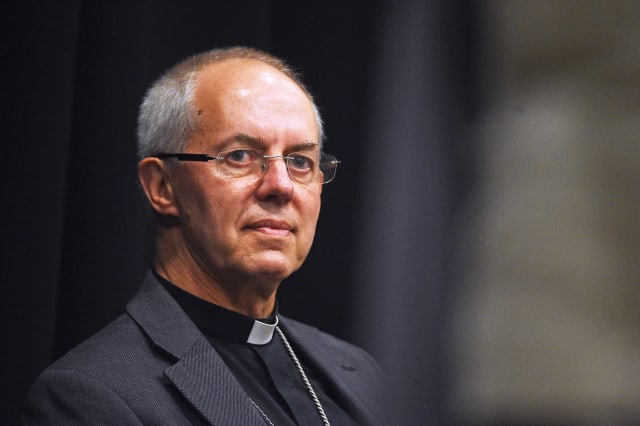 A cross-party group of senior MPs have formally asked the Archbishop of Canterbury to chair a possible citizens’ forum on Brexit.

Reports from The Times suggested MPs wanting to stop a no-deal Brexit were in talks with the Most Rev Justin Welby to chair a public conference to advise politicians on the best way forward for Brexit, with meetings reportedly due to be held at Coventry Cathedral next month.

And now a group of MPs, including a Brexiteer, have gone public with the move and formally written to the archbishop asking him to conduct citizens’ assembly proceedings following a meeting on Tuesday of key Commons figures opposed to no-deal.

The politicians want to hold public meetings, known as a citizens’ assemblies or citizens’ forums, where people with a host of differing views on Britain’s divorce from Brussels and from across the spectrum of society could come together in a bid to find a solution to the current stalemate.

In a letter to the Church of England’s most senior cleric, the MPs wrote: “Given the polarisation we have all experienced across the UK and within Parliament, we believe that a citizens’ forum on Brexit would be an opportunity to consider how to heal the divisions in our country since the Brexit referendum.

“We are writing to ask if you would be willing to oversee such a process.

“The forum would benefit greatly if you were willing to chair an independent panel that reflects the diversity of views throughout the UK to oversee the forum and ensure it is fairly run, and to work with other partners to see if it is possible to make such a forum happen.

“A process which involves a bit less shouting and a bit more listening and considering could help the whole country.”

The citizens’ forum model has been used in the UK previously to seek solutions for social care and was successfully used in Ireland when preparing the wording of the referendum question last year on whether to legalise abortion.

There have been criticisms of the attempts to bring Mr Welby into the Brexit arena, however.

Former Conservative Party leader Iain Duncan Smith told The Times: “I generally don’t criticise the archbishop but he shouldn’t allow himself to be tempted into what is essentially a very political issue right now.”

Britons are exhausted from being told why the result of the Brexit referendum should be overturned, according to Mark Francois, the vice-chairman of the European Research Group of Eurosceptic Tory MPs.

Mr Francois added in the paper: “I suspect they will not be overjoyed by having it rubbed in by the Archbishop of Canterbury to boot.”

But the archbishop received support from his fellow clergyman, the Bishop of Buckingham.

The Right Rev Alan Wilson said: “In a mature democracy people would not be afraid of doing this, because it would show what people’s concerns and fears and hopes and aspirations around this subject were.”

Lambeth Palace has not responded to a request for comment.

Following the 2016 referendum, the archbishop told the House of Lords that the campaign had resulted in an “out-welling of poison and hatred” in Britain.

He added: “It is essential not only in this House but for the leaders of both sides and throughout our society to challenge the attacks, the xenophobia and the racism that seem to have been felt to be acceptable at least for a while.”