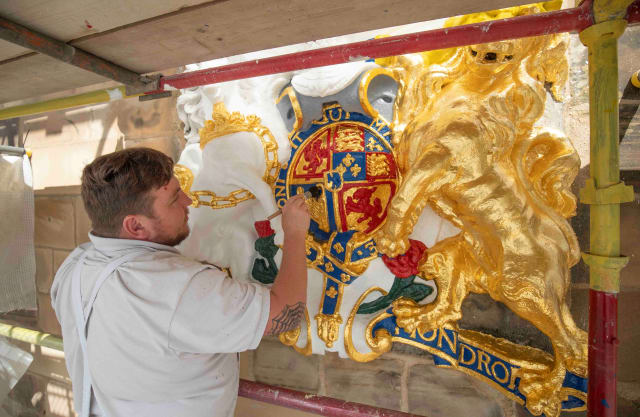 Painstaking work to restore a 300-year-old royal coat of arms on the Queen’s local church in Edinburgh has been completed.

Canongate Kirk was surrounded by scaffolding when the Queen was welcomed by Reverend Neil Gardner during her annual stay at the Palace of Holyroodhouse in June.

She was pictured pointing up at the 17th century building as it underwent renovation, including the repainting of the coat of arms.

The intricate work, carried out by Nevin of Edinburgh painters and decorators, was required to follow standards set by the Court of the Lord Lyon, which regulates heraldry in Scotland and involved the delicate application of gold leaf.

Mr Gardner, who has been minister at the church for 13 years, said: “We’ve had work done to the roof, the walls and the windows.

“We’ve kept going every Sunday – we had to close occasionally but we’ve otherwise been in business all the way through.

“With roof works and things, there’s not an awful lot to show for it but at least if we have a repainted coast of arms it will look bright and fresh.”

Canongate Kirk was built at the behest of King James VII (and II of England), who ordered that money left at the disposal of the Crown by a merchant named Thomas Moodie should be used to construct the new church.

Moodie was recognised with his own coat of arms and inscription but the same could not be said for the king himself – by the time it was completed in 1691 he had lost the throne and was living in exile.

Instead the emblem of Nassau was placed in the centre of the royal coat of arms to honour his successor William III.

The kirk’s royal links continue to the present day, with a Christmas tree gifted to parishioners from Balmoral every year.

In 2011, Zara Phillips married Mike Tindall at the church.