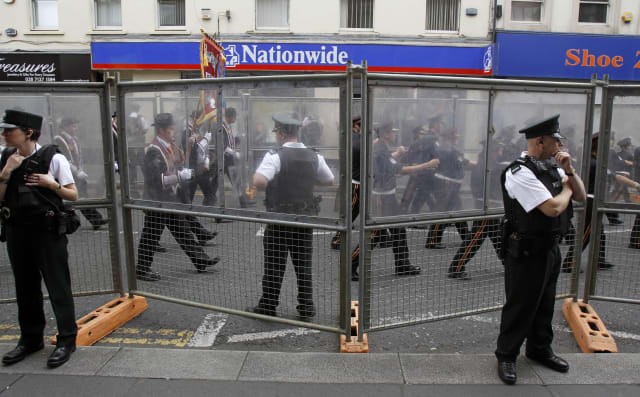 The Apprentice Boys have apologised for any offence caused by a band’s uniform at a parade in Londonderry.

The Clyde Valley loyalist flute band came under criticism and scrutiny after they paraded on Saturday, close to the scene of Bloody Sunday with a Parachute Regiment symbol on their uniforms.

Loyalists across Northern Ireland have been using the Parachute Regiment symbol to show support for Soldier F – the veteran Para facing prosecution for two murders and four attempted murders on Bloody Sunday in Derry in January 1972.

Members of the flute band from Larne, Co Antrim, had the insignia and the letter “F” displayed on the sleeves of their uniforms as they took part in the loyal order Apprentice Boys parade in Derry on Saturday.

In an effort to prevent a breach of the peace, a large number of police escorted the band as it made its way through the city. Later, a bus carrying the band home to Larne was stopped by officers on the outskirts of the city.

On Tuesday, the Apprentice Boys of Derry released a statement to BBC Northern Ireland apologising for any hurt the incident had caused.

“At the relief of Londonderry commemorations on Saturday, an incident took place with the Clyde Valley flute band with regards to an emblem on the band’s shirt sleeve,” a statement said.

“The offices of the general committee had no prior knowledge of the band’s uniform or this incident until the conclusion of the main parade at Bond Street.

“We recognise that this may have caused upset to many in the nationalist community.

“Our focus in this parade is to commemorate the siege and the relief of the city in 1689 and by no means should be used as a means to create tensions in a shared city.”

“The statement from the Apprentice Boys acknowledging the genuine hurt caused by a band parading with Parachute Regiment and Soldier F insignia is a positive step that will contribute to healing in the city.

“Tensions in our city have been heightened over the course of the weekend. We all have a responsibility to take the poison out of a very difficult situation and work together to reconcile our communities. We have occupied the space of accommodation and respect before, there is no reason we can’t move to back to that ground again.

“There is no future for our city that excludes any community. Now we have to work hard to bring people together and sustain the spirit of reconciliation.”