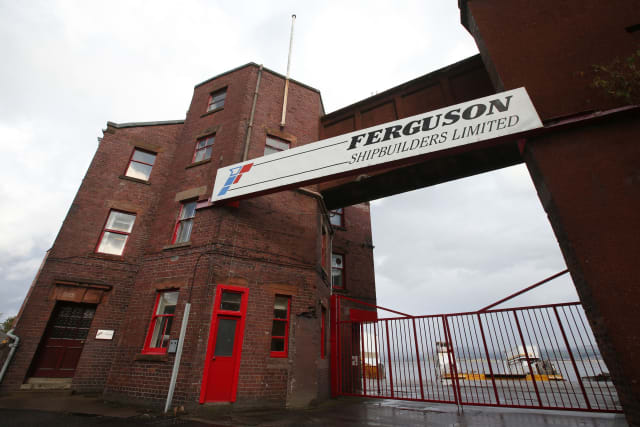 Calls have been made for a parliamentary inquiry after Fergusons shipyard bosses served notice of their intent to put the yard into administration.

Around 350 jobs are at risk at the yard by the River Clyde in Port Glasgow which was previously in administration five years ago until it was bought by Clyde Blowers Capital (CBC).

Ferguson Marine Engineering chief executive Gerry Marshall said the move had been made “with great regret and disappointment”.

He added: “This decision has not been taken lightly, but the directors do not consider there to be any other options in the current circumstances.

“However, the directors will continue to support the shareholder and the Scottish Government to realise a positive outcome for the business and its employees.”

He said: “The news of this administration will no doubt be deeply concerning to the many workers and families connected with the yard.

“The immediate priority must be to act to protect jobs, secure the future of the yard and see the conclusion of the CalMac ferry building.

“The blame for this fiasco lies solely at the feet of the SNP government who have recklessly mismanaged this contract, wasted hundreds of millions of pounds of public money and put the entire marine industry at risk.

“SNP ministers must be held to account over this entire fiasco.

“It is impossible to chart a way forward for the yard until we get to the bottom of both why things have gone so financially awry and what can now be done differently to secure a longer term future for Scotland’s shipbuilding industry.”

Ferguson Marine won the £97 million fixed price contract to build the MV Glenn Sannox and a second Hull 802 boat for CalMac, which is due to be deployed in the Outer Hebrides.

The MV Glenn Sannox ferry, which CalMac plans to use to provide services to Arran, had been due to come into service in summer 2018, but Transport Secretary Michael Matheson said in May that this date could be pushed back to 2020.

CBC said in a statement: “We understand that this decision has not been taken lightly and is fundamentally due to CMAL and the Scottish Government’s inability to find a resolution to the additional costs encountered during the build of the two prototype LNG dual-fuelled ferries.

“As shareholder we have provided a number of viable proposals to avoid the process of administration and save the jobs of 350 employees.

“However CMAL and the Scottish Government have consistently refused to participate in productive discussions, leaving the directors of Ferguson Marine Engineering Ltd with no other options given the circumstances they are faced with.”

A Scottish Government spokeswoman said: “Our priority remains to ensure the completion of the vessels under construction, secure jobs for the workforce and protect the future of shipbuilding at the site.

“We have been working to secure a future for the shipyard for two years, and it is disappointing that we have not been able to reach a commercial solution with CBC that would have prevented administrators becoming involved.

“We appreciate that this will be a concerning time for the workforce, their families and the local community, and we would like to reassure them that we are committed to maintaining the jobs on the site and building a secure future for the yard and its workforce.

“We have been working closely with trade union representatives throughout this process, and we will continue to do so in the coming days and weeks.”

Greenock and Inverclyde MSP Stuart McMillan called the decision “one that nobody wanted to see”.

He added: “It will be distressing for all the workforce, their families and the whole community. I support the workforce and the yard and I want an outcome that keeps both working and delivering for the community.

“I know the workforce are highly skilled and highly motivated and they can deliver world class ships. Our community is on their side and we want to continue to build ships.”

A CMAL spokeswoman said: “We are keen that the future of the shipyard and its workforce is secured, and a solution is found that will allow the yard to deliver the two dual fuel vessels, which will serve Scotland’s island communities.”