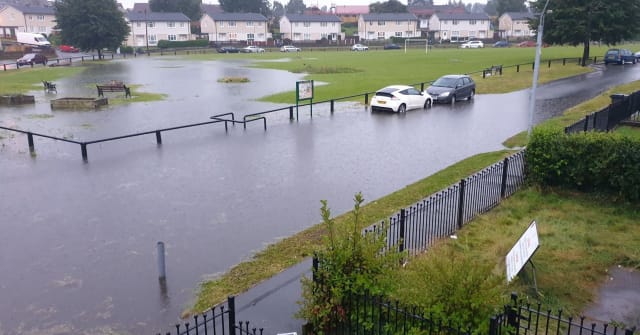 Heavy downpours have washed across vast swathes of the UK, with more rain and thundery showers poised to batter Britain.

Yellow warnings for rain and wind came into force across nearly all of the UK on Friday as unseasonable weather caused widespread disruption.

The Met Office said the band of heavy rain that had pushed across the country would be followed by heavy showers or thunderstorms.

With the rain warning valid until midnight, Meteorologist Bonnie Diamond said: “There has been a lot of rain over the last 24 hours with more heavy showers to come on the way today and tomorrow.

“So we will certainly see an impact in terms of localised flooding, difficult driving conditions and transport delays.”

Ms Diamond said that between 9pm on Thursday and 9am on Friday, Antrim in Northern Ireland had seen 39mm of rainfall – the largest amount in the 12-hour period – with the country’s August average just 97.4mm.

This was closely followed by Shap in Cumbria, which recorded 38.6mm – more than half of England’s August 69mm average – with Gwent in Wales clocking 34.8mm – a third of the country’s 107mm August rainfall average.

Amid the heavy rain and the threat of flooding, the Environment Agency (EA) advised people to “stay away from swollen rivers” and not to drive through flood water as “just 30cm of flowing water is enough to move your car”.

Strong winds are also expected to cause disruption from around 3pm on Friday until midnight on Saturday, with the Met Office warning stretching across west Wales, Devon and Cornwall, to parts of the Channel coast.

A second wind warning will then come into force on Saturday covering the whole of Wales and southern and central England as far north as Blackpool, Huddersfield and Grimsby.

The threat of slow-moving, heavy thundery showers – which could cause torrential downpours – have also prompted a yellow thunderstorm warning.

Covering Northern Ireland, northern England and much of Scotland, it is in place from midnight on Friday until 6am on Saturday, and warns that there could be damage to buildings from floodwater or lightning strikes, as well as power cuts.

Ms Diamond said that the rainfall is “pretty unseasonable for August” and along with the thunderstorms and predicted blustery conditions – with potential gusts of 60mph – the weather might “catch some people out”.

Several festivals and events have been cancelled in the wake of the weather warnings, and motorists and commuters have also been told to avoid travelling if possible.

The warnings also cover Whaley Bridge, where around 1,500 residents were recently allowed home after the damaged Toddbrook Reservoir was deemed safe.

The weather warnings will be cut back on Sunday to cover only northern England and Scotland, where thunderstorms are likely, and none are currently in place for Monday.

Network Rail said train journeys between Birmingham and Coventry are expected to be disrupted for the rest of Friday after overhead electric wires were damaged in a tunnel near Tile Hill.

This comes after a signal failure outside London Euston and damaged overhead wires in Staffordshire crippled West Coast Main Line services between London and Scotland on Thursday night.

David Golding, an interim route managing director at Network Rail, said: “We are doing all we can to repair up to 40 metres of damaged overhead power lines through Beechwood Tunnel between Birmingham and Coventry. This is taking some time and there is likely to be disruption for the rest of today.

“Yesterday we lost all power to signals at Euston which meant we could not move trains in or out of the station. Combined with overhead lines coming down in Stone, Staffordshire, this made for miserable journeys for many.”

Passengers are urged to check with their train operator before they travel.