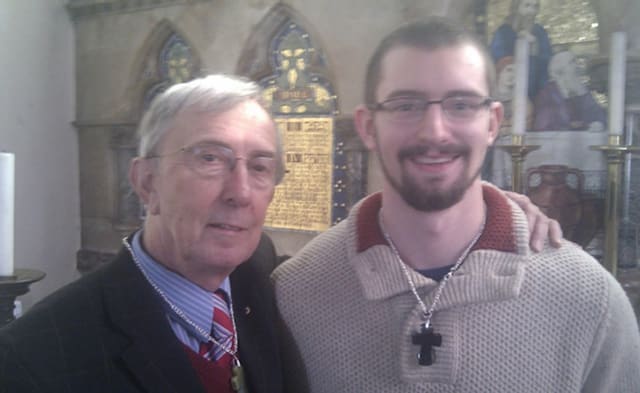 A sadistic and evil church warden is facing life imprisonment after being convicted of murdering a university lecturer following a gaslighting campaign of physical and mental torture.

Benjamin Field, 28, was found guilty at Oxford Crown Court of killing Peter Farquhar, 69, in order to inherit his house and money.

Detectives branded Field a psychopath and said he would have posed an “ongoing danger to society” had he not been stopped.

Field secretly gave Mr Farquhar drugs and spiked his whisky, hoping that his eventual death at his hands would look like suicide or an accident.

It was only when the Baptist minister’s son began targeting Mr Farquhar’s neighbour, Ann Moore-Martin, in the village of Maids Moreton, Buckinghamshire that his wicked scheme began to unravel.

The sexually promiscuous Field also gaslighted Miss Moore-Martin, a deeply religious retired headteacher, by writing messages on her mirrors purporting to be from God.

He had admitted fraudulently being in relationships with the pensioners as part of his plan to get them to change their wills.

Field accepted had had “psychologically manipulated” the retired teachers but denied any involvement in their deaths.

Mr Farquhar, who was torn about his sexuality because of his religion, died in October 2015, while Miss Moore-Martin died in May 2017 from natural causes.

Field had undergone a “betrothal” ceremony with gay Mr Farquhar while also having a string of girlfriends, and was in a sexual relationship with Miss Moore-Martin, who was 57 years his senior.

Prosecutors said Field had a “profound fascination in controlling and manipulating and humiliating and killing” and alleged he had plotted his crimes with his friend, failed magician Martyn Smith, 32.

Field, a University of Buckingham PhD student, was a prolific writer, documenting his thoughts and activities in diaries and journals.

He had also drawn up a “100 clients” list, including his parents, grandparents and brother, which the prosecution said were future targets.

Field denied murdering the author and University of Buckingham lecturer and maintained Mr Farquhar could have died from taking his usual dose of flurazepam and drinking whisky.

“This murder never happened. No-one killed anyone,” he told jurors.

Field told the jury he had created fake relationships with Mr Farquhar and Ms Moore-Martin in order to benefit financially from their deaths but had not wished them dead.

“The mirror writing was all fake, the relationship was all fake and done with gain in mind,” he said.

“I have deceived absolutely everybody that I have any kind of relationship with.”

Field, of Wellingborough Road, Olney, Buckinghamshire, had previously pleaded guilty to defrauding Ms Moore-Martin of £4,000 to buy a car and £27,000 for a dialysis machine.

He also admitted two burglaries and the two fraudulent relationships.

Field insisted he had acted alone and not recruited his young brother Tom, 24, or Smith to help with the dialysis fraud.

The jury found Field not guilty of conspiracy to murder Miss Moore-Martin and the alternative charge of attempted murder.

He was also found not guilty of possession of an article for the use in fraud.

He showed no emotion as the jury forewoman returned the verdicts.

Trial judge Mr Justice Sweeney remanded him into custody to be sentenced later following the preparation of a psychiatric report.

Smith, of Penhalvean, Redruth, Cornwall was acquitted of murder, conspiracy to murder, possession of an article for the use in fraud, two charges of fraud and one of burglary.

Speaking afterwards, he said: “I am relieved that this ordeal is finally over.

“I would like to thank my true friends and family for all the emotional support that they have provided since my arrest.

“The lessons I take from this case are first and foremost to always be your own person and secondly to always choose your friends very carefully.”

Cambridge University graduate Tom Field, of Wellingborough Road, Olney, Buckinghamshire, was found not guilty of a single charge of fraud.

He hugged his parents, Ian and Beverley, in court after he was acquitted.

Mr Farquhar’s brother, Ian, said afterwards: “Listening to the trial and hearing Ben Field give his evidence about what he did to Peter has been extremely difficult.

“His actions have been unbelievably callous, and he has told lie after lie after lie in order to achieve his goals, deceiving everyone he met.

“Ben Field is an arrogant man who has an extremely high opinion of himself.

“He used my brother as some kind of object to get his ends.

“All the things that were precious to Peter, Ben robbed him of.

“He did it all just to get some money, which we find absolutely astonishing.”

Mr Glover said Field had taken pleasure in tormenting his victim and torturing him physically and mentally, adding: “Everything is about Ben Field and Ben Field’s gain.

“Ben has never shown any remorse for what he has done, and I am convinced he is unable to show human empathy.

“Ben’s arrogance led him to believe that he would literally get away with murder.

“I am convinced that had he not been stopped, he would have posed an ongoing danger to society.”

Chris Derrick, head of complex casework unit at CPS Thames-Chiltern, added: “I think torture is a word that can be used to described Benjamin Field’s behaviour.”