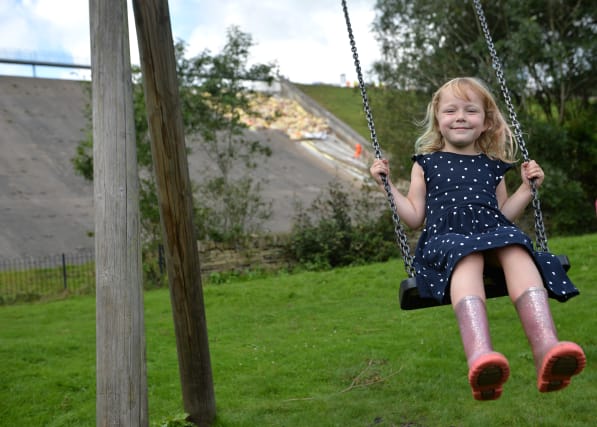 Fears over the damaged dam in Whaley Bridge have dwindled as children could be seen playing in the park directly below.

After more than 1,500 people were evacuated from the town since August 1, Derbyshire Police said stability of the dam wall at Toddbrook Reservoir had been achieved at 1pm on Wednesday and people could return to their homes.

On Thursday, life for residents appeared to get back to normality as shops and businesses reopened.

However, those who decided to spend the day in Whaley Bridge Memorial Park could catch a glimpse of more than 500 tonnes of aggregate which had been dropped onto the dam by an RAF Chinook.

One of the children who could be seen playing football below the dam on Thursday, Amelia Grace, appeared unfazed by damage.

Amelia’s grandmother Linda Darby told PA: “It was just lovely to get back to normal.

“It has been relentless but it has been nice to see everybody get back to normal. Walking around, everybody has been so supportive.

“It was quite frightening, and when we went into the park and looked up and saw the hole – it could have been so very different.

“But once it all settles down again it will be back to little Whaley.”

She continued: “Looking up at it, it was immense.

“You could see the scale of it – we looked at it from the other side the night before when the water was gushing down but then to come round and see it now… it was a sight to see.”

Amelia’s grandfather, Michael Darby said: “We took it all for granted but it could have happened just like that and if it had happened at night time it could have been so different.”

Environment minister Therese Coffey visited the dam on Wednesday evening and said there was plenty of work still to do.

She said: “There will be quite a lot of work now going into the engineers’ reports, the Environment Agency as the regulator working with the Canal and River Trust.

“This is not going to be a short-term project, it’s going to take some time to really understand what can happen next as I know how important the reservoir is to people in this community.

“But also, we need to make sure, as ever, our number one priority is safety.”