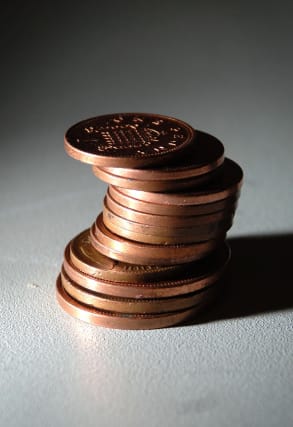 No 1p or 2p coins were produced last year by the Royal Mint.

The Royal Mint produces coins, which can have lifespans lasting decades, in response to need.

The Treasury asks the Mint to produce certain amounts and denominations to meet the needs of the economy.

There can be some years when there are already enough of a certain coin value already in circulation – so there is no need for more.

There were several years in the early 1970s and early 1980s when no 2ps were produced.

There are already around 10.5 billion 1ps in circulation, plus 6.3 billion 2ps sitting in wallets, tills, jam jars and piggy banks across the UK.

The Treasury also said no £2 coins were produced last year, as there are already sufficient numbers in circulation at around 494 million coins.

A Treasury spokesman said: “We didn’t ask the Mint to issue any £2 or 1p/2p coins this past year because there are already enough of these in circulation.

“Our coins are of the highest quality and the amount we ask the Royal Mint to produce every year depends on demand from banks and Post Offices.”

Copper coins were previously feared to be under threat when a consultation was launched about the mix of cash in circulation.

But in May, the Government emphasised there would be no changes to the mix of coins and notes, with all denominations – from the penny to the £50 note – staying in circulation.

Cash use has fallen sharply in recent years as the popularity of contactless payments has surged.

Reduced demand for coins means banks may not need to order as many new ones as they have done in the past.

But many people still rely on cash for their day-to-day spending.

Some 2.2 million people are estimated to be almost entirely reliant on cash in their daily lives, with the elderly, vulnerable and those in rural communities likely to be hardest hit by any decline in cash availability.

Regulators have been looking at how to make sure people can continue to have access to cash when they need it, amid concerns over bank branch and ATM closures.