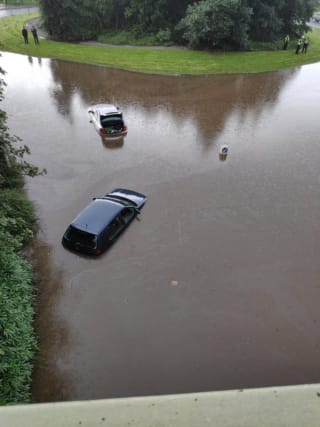 A man was spotted cycling through a flood after heavy rain caused travel problems across Edinburgh.

The video was taken at a roundabout near the city’s airport, just off Eastfield Road, and showed the flood water leaving vehicles on the road partially submerged.

Just after 8pm, the airport’s Twitter account advised people to check their travel options, adding that Lothian Buses could only stop on Glasgow Road because of the conditions.

The road reopened around half an hour later.

Trains in and out of the city were also hit by flooding in Linlithgow which caused the line to close.

Services between the Scottish capital and Glasgow Queen Street High Level and Dunblane were affected – with some passengers being taken back to Edinburgh.

ScotRail later tweeted footage of conditions inside the Winchburgh Tunnel after “a massive amount of rain”.

Another post read: “The 1934 and 1945 departures aren’t able to move forward towards Glasgow, as the floodwater is too deep in Winchburgh Tunnel.

“Now arranging for both to return to Edinburgh. It’ll be the 1945 departure first, followed by the 1934 departure.”

The disruption comes amid a busy Edinburgh Festival Fringe season and with thousands of music fans heading to Princes Street Gardens to see Florence + The Machine.

Edinburgh Summer Sessions organisers earlier on Wednesday tweeted to inform revellers of a delay in opening the gates to the venue because of the conditions.