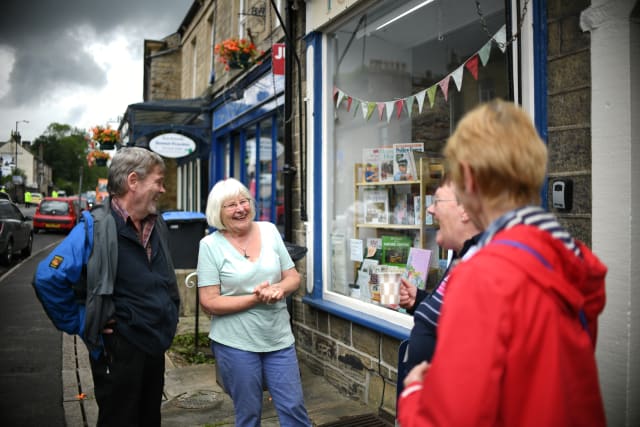 Whaley Bridge residents have spoken of their relief after returning to their homes for the first time in almost a week.

Many expressed their thanks to the emergency services for their efforts to stabilise the dam wall at Toddbrook Reservoir in the Derbyshire town.

“We just happened to be there just 10-15 minutes before so we just thought we’d wait to see if we heard any news.

“And we’re home. That’s what we wanted. We’re all safe and we’re all together so there’s not a problem.

“We’d been on holiday for two weeks and we came back to this so we’ve not gone back yet.”

Another resident, Bernie Sharples, who returned home with her husband and her dog, said: “It’s absolutely fantastic, it’s just great to see everyone again.

“It’s been an upsetting time but it’s absolutely fantastic, all the authorities, the police, all who helped get us back here – a big thank you to everybody.

“I just can’t wait to get back to work tomorrow in the morning.”

Describing the rollercoaster of emotions he had felt over the last seven days, one resident, Nigel Eastmond, said: “We had some tense days. I think everybody knows that on Thursday and Saturday there were tense moments.

“I think Monday was the day that we woke up and there was no overnight rain, a lot of water had come out the reservoir and there was a great sense of relief.

“It was much quieter and there wasn’t as much traffic around.

“Yesterday, there was an even greater sense of relief and today it’s just fantastic.

“They saved the village, that’s what happened. They saved it.”

Local businesses also spoke of how the evacuation had affected them.

The owner of Adeva hairdressers in Whaley Bridge, Julian Thompson, said he did not know how he would cope if the evacuation had gone on for another week.

He said: “It’s been horrendous. It’s been a huge huge worry.

“Not just yourself but all your friends, clients, everybody. It was incredible, the response by everybody… but it’s just huge relief now.”

He added: “It’s been very very difficult. I’m relieved it’s only gone on for a week because I was thinking, if it goes on for another week or so, what am I going to do?

“I have staff and I have to pay their wages. A week, I could just about do it – any longer than that and I’m starting to panic.

Speaking of the job the workers had done on the dam, the manager of local Whaley Bridge business Goyt Wines, Malcolm Swets, said: “They’ve done a fantastic job, they couldn’t have done any better.

“It’s all been done in a professional manner – they are welcome to a drink if they want one.

“Obviously at the start we didn’t know what was going to happen but unless we had the downpours over the weekend, they were making steady progress.

“I’m not saying we planned for this day but if it wasn’t going to be today, it would be tomorrow.

“There was always going to be disruption, it was just a question of how long that disruption would be.

“We’ve been closed since 1.30pm on Thursday… but everybody is safe so it doesn’t matter. Everybody has had their own problems but nobody has been hurt.”

Community centre and book shop owner Anne Leyland claimed to own the first business to open in Whaley Bridge.

She said: “Me and the gentleman next door at the Phoenix were the first to open, but of course, he’s got to cook food.”

Ms Leyland said the evacuation had forced her to make a 40-mile round trip to buy milk.

She added: “It’s ridiculous. But the road is open now.”

One resident, Karen Edleston, decided to immediately get her hair cut as she entered the town for the first time since Thursday.

Ms Edleston said: “Well, I was desperate to get my hair cut because I’m going to a wedding on Saturday and I didn’t know where I would go if I didn’t come back here.

“So as soon as I realised it was open, I contacted Julian and he agreed to come down.”

Speaking of how it felt to be back in Whaley Bridge, Ms Edleston said: “Very good. It’s excellent.”