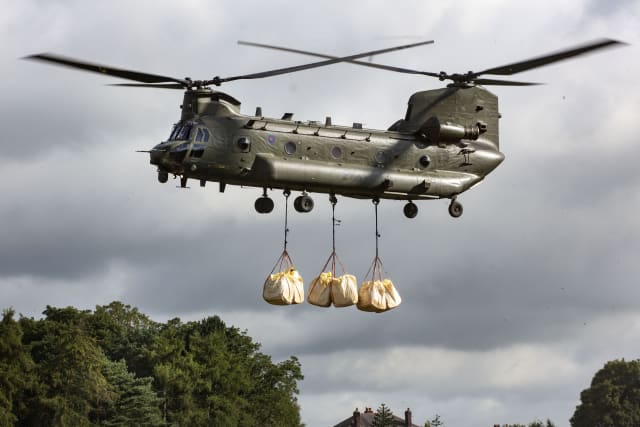 Residents in Whaley Bridge are hoping to hear on Wednesday that they can return to their homes after being evacuated last week.

Derbyshire Police Deputy Chief Constable Rachel Swann said she was expecting “good news” from an inspection of the dam following efforts to prevent it collapsing.

“We have obviously been pumping the water out and it has gone down at a fast speed,” she said.

“It is now beyond 9.5 metres. We will keep draining the water until it is safe to stop.

“What we need to do is just to check the reservoir is fit for when it rains again and we have got a yellow weather warning.”

Hundreds evacuated from Whaley Bridge have been left “increasingly fed-up” as only a small number were able to return to their homes on Tuesday.

More than 1,500 people have been evacuated from the Derbyshire town since Thursday amid heavy rain, although a small number refused to leave their properties.

At a meeting in a school in neighbouring Chapel-en-le-Frith, the remaining residents were told they had to wait until after noon on Wednesday before a decision could be made on whether they could go back.

Derbyshire Police previously said those evacuated from the town must wait until experts decide that Toddbrook Reservoir’s damaged dam is “absolutely safe”.

Despite most people having to wait, representatives of the police and the Environment Agency said the water level had dropped way below the target of eight to 9.5 metres.

Police said a safe water level at the reservoir had been reached after around 17% of the reservoir’s capacity had been pumped out.

Residents were also told engineers would assess the damage to the wall before making a decision on allowing more people to return.

The Met Office has issued a yellow weather warning covering much of England, including the Derbyshire town, on Friday and Saturday.

One resident who has returned, John Lomas, said: It’s great to be back home. All the services guys have done an excellent job, I’m very proud of them all.”

Another returning resident, Melissa Broxup, said the last few days had been “a nightmare. An absolute nightmare”.

“I’ve not been able to go anywhere and Whaley is so quiet. Everyone in Whaley has been amazing. It’s not easy.”

Asked what it was like to be one of the first to be let back in, she said: “It’s great. I can finally get some sleep. I just can’t wait to get back in my flat.

“I’m happy but on the other side I’m gutted for those who can’t come back.”

An RAF Chinook was again drafted in on Tuesday to help the previously dropped bags of aggregate settle into place.

RAF Regional Liaison Officer for the North West, Wing Commander Gary Lane, said: “The work we have done is just finding its feet.

“When you put a load of aggregate down it needs stamping in, we’ve not been able to flatten that because it has just been dropped.”

He said about 100 military personnel had been drafted in to help with the dam.

Addressing what would happen once people are given the green light to return home, Ms Swann said all cordons would be lifted and roads would go back to normal.

In the meantime, she insisted that security measures were still in force in the area after reports of burglaries and prowlers.

Ms Swann said: “We can assure you that security of the area continues. We are using drones regularly to patrol the area.”

Members of the public at the meeting were also told the dam would eventually have to be rebuilt.

A spokesman for the Canal and Rivers Trust said: “We are very much in the emergency phase now and we are currently repairing and carrying out construction work.

“It is a long-term construction project, but we will not have started from scratch. It could take 18 months, two years, three years, who knows?”