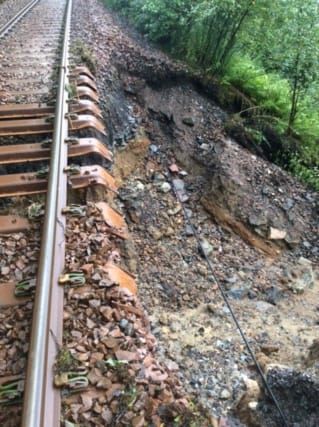 Part of a rail route in the west of Scotland will be closed for at least a week after severe flooding swept away part of the track.

Replacement buses have been introduced along sections of the West Highland Line, which runs from Glasgow Queen Street to Oban and Mallaig.

Heavy rain flooded the track between Tyndrum Lower and Dalmally on Monday, forcing the line to be closed in that area.

ScotRail expects the disruption to last until just before midnight on Monday, although the operator said it could take longer to repair the damage.

Replacement buses will run from stations between Oban and Arrochar, as well as from Ardlui and Arrochar to Crianlarich.

A ScotRail spokesman said: “The line will remain closed for the next seven days while engineers carry out vital repair works.

“We’ve arranged alternative transport to keep people moving and we’re sorry for the inconvenience this will cause.”

Engineers will be working to repair the track at sites around Ardlui, Crianlarich and Tyndrum, where the heavy rain and flooding washed the trackbed from under the railway.

At the worst affected sites, between Ardlui and Crianlarich, more than 1,000 tons of material has been swept away.

A Network Rail spokesman said: “Our engineers are working hard to fully assess the repairs required to reopen the line as quickly as possible for customers.”

He added: “The flooding over the weekend has caused significant damage at multiple locations along the line and we will need to rebuild the trackbed and supporting embankments in some locations before we can reopen the line.”