Man arrested on suspicion of sending racist tweet to footballer 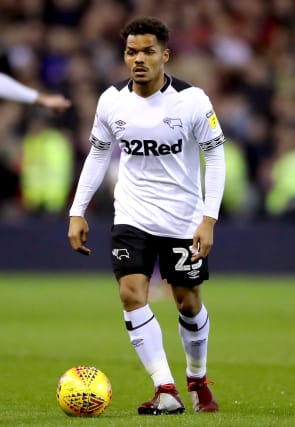 A 29-year-old man has been arrested on suspicion of racially aggravated harassment in connection with a tweet sent to footballer Duane Holmes.

The 24-year-old highlighted a message he received on Twitter shortly after taking to social media to celebrate his side’s 2-1 victory at Huddersfield in their opening Sky Bet Championship game on Monday night.

Replying to Holmes, a Twitter user and supporter of rival East Midlands club Nottingham Forest, said: “Drop us a Banana off”, and included a banana emoji.

However Holmes later posted a screenshot of the comment with the caption “I’ll just leave this one here.”

On Tuesday, Nottingham Forest said it had banned a supporter who had aimed what it called “horrific abuse” at Holmes over social media and had referred the matter to police.

In a statement, the club said: “The club are aware of some racist social media messages which have been posted by an individual who claims to be a supporter and denounces the conduct of the individual responsible in the strongest possible terms.

“As soon as the club was made aware of the offending posts the matter was referred to the police as they appear to meet the threshold of criminal conduct.

“The club will continue to co-operate with the police who are pursuing their enquiries.

“Whilst these enquiries are ongoing the club has suspended the ability of the individual concerned from attending matches.”

It added: “The club will take further action against the individual when the outcome of the police enquiries and the criminal process is known.”

On Monday, anti-racism charity Kick It Out said it had reported several incidents of alleged discriminatory abuse to the Football Association, following Saturday’s opening season fixtures.

In a statement it said: “We are appalled to hear that the sister of Fulham’s Cyrus Christie was subjected to alleged violence and racist abuse on Saturday.”

Sophie meets filmstar alpaca – and is not amused