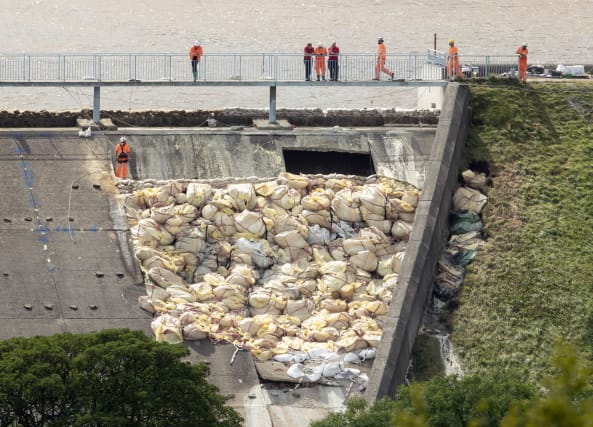 Residents evacuated from Whaley Bridge are hoping to learn when they may be able to return to their homes.

The authorities are hopeful inspections can take place at Toddbrook Reservoir, in Derbyshire, on Tuesday, with a public meeting called at 5pm.

More than 1,500 people have been evacuated from the town since Thursday following heavy rain, although a small number refused to leave their homes despite fears of the damaged dam bursting.

Some 20 residents remained in 16 properties in the evacuation zone on Monday evening after warnings they were “taking their lives into their own hands” and jeopardising the safety of the emergency services.

Deputy Chief Constable Rachel Swann said: “We will repeatedly visit these people to remind them of the risks they are posing to themselves and emergency responders, however there is no specific legislation under which we can force these people to leave.”

Fire chiefs have said specialist engineers have monitored the dam wall 24 hours a day with lasers and are reassured by their assessment, with a seven-day estimate for how long people would be out of their homes a “worst-case scenario”.

On Monday, Colin Winterbottom, station manager at Derbyshire Fire and Rescue Service, said “around 30-40%” of the water at Toddbrook Reservoir had been removed over the past five days, adding that another day of work will “probably see the dam down to a safe level”.

Derbyshire Police said the water level at the reservoir had been reduced by six metres, while the dam wall has been packed with 530 tonnes of aggregate, which is being cemented into place to reinforce the spillway.

“Once a level has been reached – and is able to be maintained – engineers will view the damage to the wall and a decision will be made regarding when it is safe for evacuated residents and businesses to return to Whaley Bridge,” the force said.

An RAF Chinook helicopter was expected to be used again to move sandbags in a bid to maximise the dam’s integrity, while the Environment Agency is monitoring the flow of water into the River Goyt.

Residents will be hoping to find out when they are likely to be allowed back into their homes at a public meeting at a school in Chapel-en-le-Frith at 5pm on Tuesday.

At a meeting on Monday, Labour MP for High Peak, Ruth George, said authorities hope inspections can take place on Tuesday afternoon or evening before a decision is made.

Derbyshire’s police and crime commissioner, Hardyal Dhindsa, told residents he recognised the “disruption” but added the priority was still a “threat to life”.

“We don’t want anyone to be devastated. We want to make sure we protect the properties of everybody. That is going to be difficult when there is an evacuation,” he said.

“There is a minority number of people not wanting to leave their properties and they are taking their lives into their own hands.”