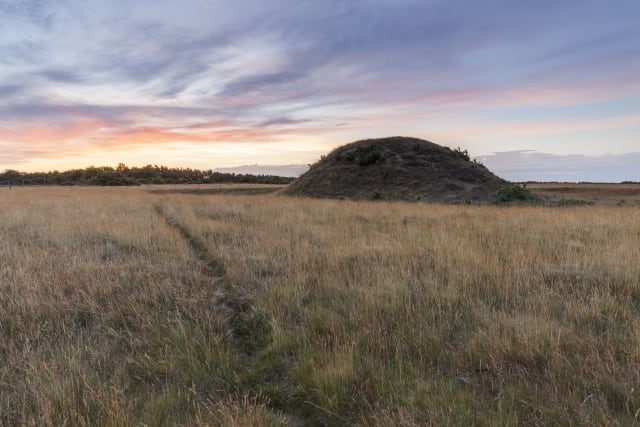 The National Trust has transformed Sutton Hoo so visitors get a “real sense” of the importance of the royal burial mounds when they stand in front of them.

Sutton Hoo, considered to be one of Britain’s most important archaeological discoveries, is thought to be the final resting place of King Raedwald, who ruled in the seventh century.

An 88ft-long (27m) rusted steel sculpture of the burial ship found at the site near Woodbridge in Suffolk now stands in a courtyard near the entrance.

The £4 million transformation of the site also sees the home of the landowner who instigated the digs used to tell the story of how the artefacts were discovered just before the Second World War.

The story of the Anglo-Saxons and the famous warrior helmet is told in a revamped exhibition hall with the help of new video screens and voice recordings.

New walks have been created in the scenic grounds with views across the River Deben, visitors are now free to roam the burial mounds outside of guided tours, and a 55ft (17m) viewing tower is being constructed.

Mike Hopwood, of the National Trust, said the previous exhibition layout left some visitors finding the burial grounds as a “bit of an anti-climax” by the time they reached them.

“What we’ve done is we’ve geared the entire visit as a sort of build,” he said. “You’re building loads of little ‘wows’ so that when you stand in front of those mounds you get a real sense of what you’re looking at.

“You get the significance of those and you get a tingle in the hairs in the back of your neck because you know what you’re looking at and it starts with that ship because the ship is the key to it.

“People need to understand how big that ship was, how important and how vast the burial chamber was.”

The previous layout was created in 2001 and had multiple narratives contained within a single exhibition hall.

Mr Hopwood said it was of a “learning style that was suitable for 2001” but “people’s expectations have moved on and our ability to tell stories has moved on”.

Tranmer House, built in 1910, was the home of landowner Edith Pretty, who instigated the digs in her grounds. She died in 1942.

Her house now contains an exhibition on how the items were discovered in 1939, including archive photos.

It was previously open to the public as an opportunity to tour the house but did not have an exhibition within it.

Sutton Hoo was closed for seven months while the National Trust updated the site.

Outdoor areas were reopened in April and the full exhibition opens its doors on Monday.

The viewing platform is due to be completed in September.

“The finds here lifted the lid off the Dark Ages,” said Mr Hopwood. “This site is really important and what we’re doing here is to try to bring the significance of it up to standard, where it should be.”

He said that knowledgeable guides will remain on site as before.