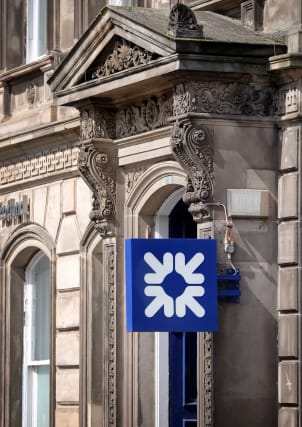 Royal Bank of Scotland has unveiled a bumper £1.7 billion payout for shareholders, delivering a surprise windfall for the taxpayer.

The bank announced a special dividend of 12p per share alongside an ordinary interim payment of 2p per share.

An estimated £1 billion of the £1.7 billion payout will be returned to the taxpayer owing to the Government’s stake in the bank.

It comes as RBS said it had achieved its highest half-year bottom-line profits in more than a decade, with attributable profits jumping 130% to £2 billion.

The figures were boosted by the sale of its stake in Saudi bank Alawwal, which completed its merger with Saudi British Bank in June.

Attributable profit for the second quarter was up 35% to £1.3 billion.

Return on tangible equity was 12.1% in the period, but the company warned that, due to the uncertain economic environment, it was not likely to achieve higher than this level in 2020.

However it maintained its target in the medium term.

Costs were down by £173 million, with a target in place for £300 million savings by the end of the year.

Net lending was up 2.5%, while the bank recorded £14.3 billion in gross new mortgage lending.

Bank net interest margin slipped 5 basis points lower to 2.02% in the second quarter, as competitive pressures in the mortgage business took their toll.

Chief executive Ross McEwan said: “Given the uncertain and competitive environment, we are focused on the areas we can control; costs are down, capital and liquidity are strong, and we continue to grow lending to the real economy.”

No announcements were made regarding the hunt for Mr McEwan’s successor, nor was any new provision made for PPI claims.